Every corner you turn in Charleston, SC reveals part of the city’s storied charm. Moss-draped trees, pristine beaches, cobblestone streets, a steeple-studded skyline — those of us lucky enough to call the Holy City home could sing Her praises all day long.

And, to be honest, there’s even more to love about this corner of the Lowcountry than meets the eye. If you’re thinking of making the move, welcome! Here are a few things to keep in mind:

1. Downtown is amazing, but there is much more to explore.

While most people picture our historic downtown district when they think of Charleston, this great city by the sea is actually comprised of far more than the 127 square mile peninsula. In addition to downtown, Charleston “proper” includes Daniel Island, James Island, Johns Island, and West Ashley. But we’d be remiss not to mention the nearby townships of Mount Pleasant, Isle of Palms, Sullivan’s Island and Folly Beach, too.

2. We brake for snow flurries.

Planning your wardrobe for an unfamiliar place is tricky. So you should know Charleston has a humid subtropical climate … emphasis on the humid. It’s essentially summer all year. The caveat is that it’s so humid at times it feels like the city is giving you a big, sticky hug. On the plus side, the sighting of a single snowflake is enough to close down schools and government offices.

Welcome to winter in charleston, South Carolina. Where it is 70+ degrees outside and everyone is wearing shorts and flip flops.

3. With that said, pack flip-flops.

Yes, we are those people — the ones sportin’ sandals in the dead of winter. Most locals have multiple pairs of Rainbows or Reefs in steady rotation, as well as a trusted pair of Sperry Top-Siders. Charleston women do wear heels, too, but word to the wise: watch your step while downtown, ’cause our historic streets aren’t the easiest surface to walk on in four-inch wedges.

It’s no wonder one of Charleston’s many nicknames is Chollywood, because Hollywood can’t seem to stay away. Tons of television shows and movies have been filmed here, and the list keeps growing: Army Wives, Reckless, The Patriot, The Prince of Tides and, of course, The Notebook, to name a few. Darius Rucker lives here, Reese Witherspoon vacations here, and Blake Lively and Ryan Reynolds married here.

5. We don’t mess around when it comes to food.

We may not be the biggest city on the map, but we boast some of the best chefs in the country. She-crab Soup at The Wreck of the Richard and Charlene, the Big Nasty at Hominy Grill, Rib-Eye Deckle at The Macintosh, Pickled Shrimp at Edmund’s Oast, any burger at Husk, Tuna Nachos at Rita’s, boiled peanuts, biscuits and gravy — there isn’t enough time in the day to cover our culinary wonders.

The lineup for the 40th annual @SpoletoFestival has been announced! We can’t wait! #Spoleto #Charleston pic.twitter.com/QOpyCsoWq9

6. Don’t let anyone tell you we aren’t cultured.

Downtown is home to Dock Street Theater, which opened its doors in 1736 and is America’s first. Each spring, the city becomes a style Mecca as sartorial minds flock to Charleston Fashion Week. We also host the internationally lauded Spoleto and regional Piccolo Spoleto festivals. For that matter, you can’t swing a stick without hitting an arts-related festival, parade, walk, or party around here.

7. There is water everywhere.

By definition, the Charleston peninsula is flanked by water on three sides and all of the city’s island towns are surrounded by it. We’ve got some of the best beaches — Folly, IOP, Sullivan’s, and Kiawah. And few things in this world are as magical as the sun hitting the salt marsh. (That smell? It’s pluff mud. You’ll learn to love it.)

8. Our nightlife game is strong.

If you stick to the college bar crawl circuit, you’re doing yourself a disservice. Enjoy the vibe at the Rooftop at Vendue, swig craft beer at Closed for Business, bowl a turkey while drinking a cold brew at The Alley, step back in time at the Cocktail Club, or hit the newly revamped dance floor at Prohibition. Bonus? Our live music is legit, too.

Bases loaded for the in the bottom of the 6th with no outs #charlestonriverdogs pic.twitter.com/IEp7tjhHSZ

If you’re itching to catch a game, we’ve got you covered. The Joe is home to the River Dogs (and puts on one heck of a fireworks show). The South Carolina Stingrays, a killer ice hockey team, is headquartered here as well. If you’d rather be part of the action, pick your poison — kite boarding, wakeboarding, paddle boarding, horseback riding, recreational leagues. You name it; we’ve got it. And, our waves may be small, but surf culture is alive and well at Folly Beach. Just head to the Washout.

Rocking some @nokidhungry swag while hanging with our pal Bill Murray in Charleston! #nokidhungry #loveschocolatepie pic.twitter.com/i3awkaeq9V

10. Bill Murray is our unofficial mascot.

One of the many celebs who calls the Holy City home, this iconic movie star is a man about town. He makes cameos at grocery stores. He crashes house parties. He photobombs engagement shoots. He is a co-owner of the River Dogs and local eatery Rutledge Cab Company, both of which have dubbed him the “Director of Fun.”

Charleston is nothing if not historic, and that history is on display as far as the eye can see. The oldest city in the state and one of the oldest in the nation, it was founded in 1670 and is where the shots that started the Civil War were fired — which you can learn about at the actual site, Fort Sumter.

12. Being called a shucker is not an insult.

Locals know the best months in any calendar year are those that have the letter -r in their name. That’s because from September to April, the water is cold enough for oysters. As such, oyster roasts abound and Chucktown transforms into Shucktown. Get yourself some good gloves and keep an oyster knife at the ready.

13. Living here is kind of like being in a fairytale.

We have a fountain shaped like a giant pineapple. Our buildings span the color spectrum of a rainbow. The air is thick with the heady fragrance of honeysuckle and gardenias, and the melodic sound of horse hooves clopping on streets (some of them cobblestone) will lull you into a state of nirvana.

14. We’re at one with nature, for better or worse.

Living in such a bio-diverse environment means there’s little filter when it comes to the wildlife. Sure, we have lots of cute and cuddly woodland creatures. But we also have snakes, sharks, and gators — the latter of which you should never feed, which sounds like common sense… but you’d be surprised.

15. SUNDAY FUNDAYS ARE OUR JAM.

Everyone moves a bit slower on Sundays, which often include brunch or church followed by lunch, beachin’ it, and maybe a few rounds of cornhole for good measure. Earmark Second Sunday on King, when this famed street shuts down to traffic to make way for pedestrians to mingle. It’s worth mentioning, though, that Charleston liquor laws prohibit the sale of alcohol on this day of the week.

16. We have a slight obsession with the palmetto.

By slight, I clearly mean monumental. You’ll find the palmetto emblazoning everything from our state flag to t-shirts, koozies, Tervis tumblers, our bodies (it’s a popular tattoo pick), and car decals. In our defense, we are the Palmetto State.

Ever been to South Carolina? Visit @Boone_Hall to immerse yourself in #Gullah culture! @BornToExploreTV pic.twitter.com/SgeHBboJEw

17. Gullah is a defining influence.

Although the city’s ties to slavery is a dark spot in our history, the legacy of the Gullah people is an enriching element of Charleston’s cultural tapestry. The descendants of slaves known as the Gullah or Geechee, form a tightknit community that honors their rich West African, Caribbean, and Creole cultural heritage to this day. From okra stew to the distinctive smell of sweet grass baskets, the Gullah way is part of the very marrow of our beloved home.

18. You’ll meet a whole lot of people from Ohio here.

Charleston is a proverbial melting pot, so we have transplants from all over the world. However, a rising number of these transplants hail from Ohio — a fact that has become a running joke. If you’re from Ohio, we won’t hold it against you. But, in all fairness, you’ll likely get some good-natured ribbing.

If you find yourself in Charleston, you should absolutely visit the @CharlestonUU graveyard. Incredible. pic.twitter.com/bFFy5FDUQ2

19. We’re proud to be tourists in our own town.

Do we avoid certain areas during peak tourism times? You betcha. Having said that, Charlestonians aren’t ashamed to take part in the touristy stuff should the mood strike. We’re all for strolling through The Market, swinging on the benches at Vendue Wharf, peering though wrought iron fences at centuries old graveyards, walking the Ravenel, or taking a ghost tour of the Old City Jail.

20. It’s the number one city in North America.

That’s not just our hubris speaking. Charleston has been voted the number one city in the United States and Canada by Travel + Leisure readers three years in a row. Likewise, it has won Condé Nast Traveler Readers’ Choice Top U.S. Cities for five years running now and is also holds tight to the No. 2 spot on the list of Top 25 Cities in the World.

Julie is a freelance writer based in Charleston. 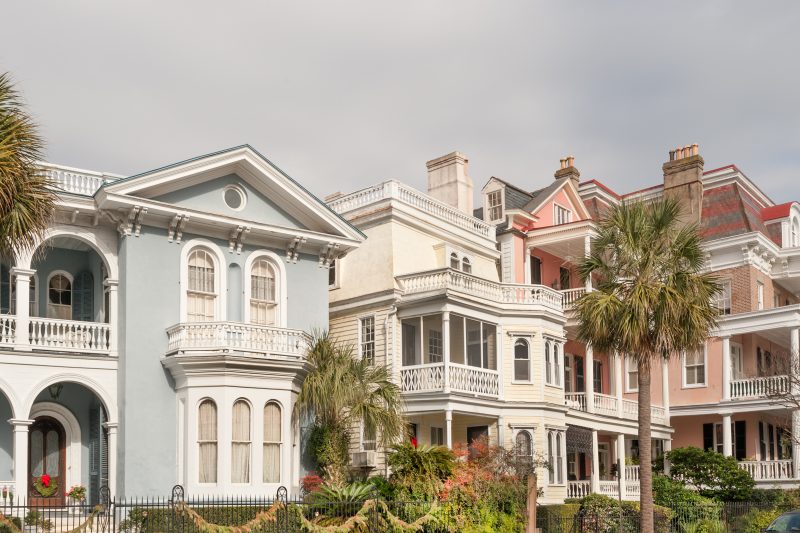 Thinking of buying a house in Charleston? With its miles of pristine beaches, countless incredible restaurants, and charming historic neighborhoods, it’s no surprise that Charleston consistently ranks as one of the top destinations for people…

END_OF_DOCUMENT_TOKEN_TO_BE_REPLACED 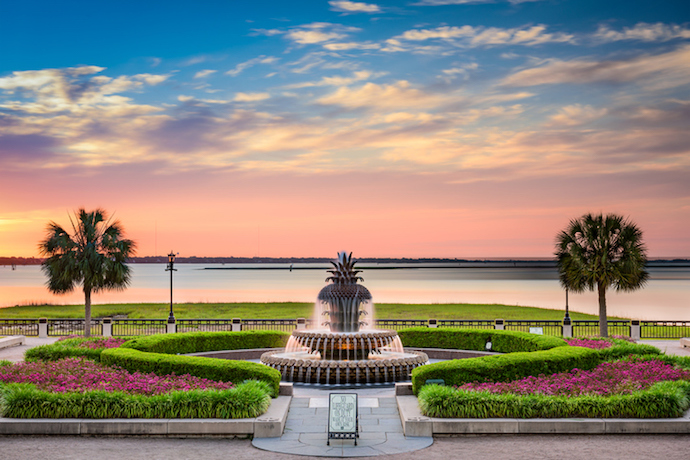 20 Things You Need to Know Before Moving to Charleston, SC

Every corner you turn in Charleston, SC reveals part of the city’s storied charm. Moss-draped trees, pristine beaches, cobblestone streets, a steeple-studded skyline — those of us lucky enough to call the Holy City home…

END_OF_DOCUMENT_TOKEN_TO_BE_REPLACED 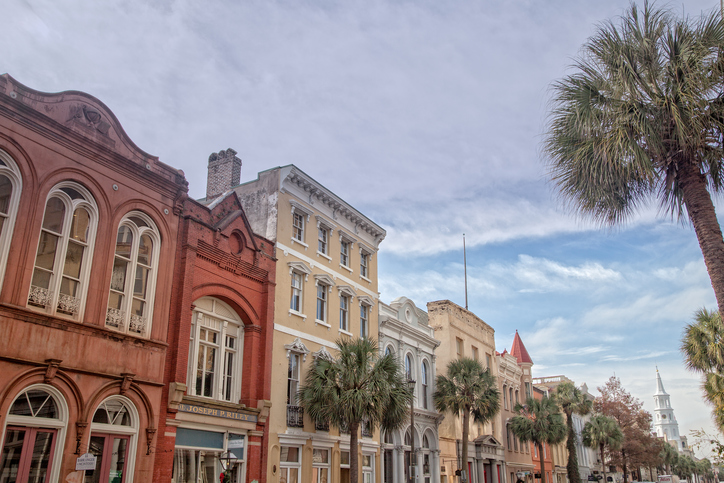 Where Everybody in Charleston, SC is Moving From

If you want to live near the beach, the obvious choices are Florida and California. But what about someplace a little less crowded and more affordable? Charleston might be the answer. The South Carolina city…