Thinking about moving to Chicago?

Well, we can’t blame you. The nation’s third-largest city boasts some of the nation’s finest museums, theater, restaurants, bars and so much more. Nestled along the shores of the stunning Lake Michigan and home to iconic architecture, Chicago serves as a picturesque backdrop for life in the city.

The Windy City is also a city made up of many distinct neighborhoods and enclaves, each of them home to a slightly different flavor of Chicago life. Whether it’s the taquerias and art galleries of Pilsen or the sports bars and boutiques of Lakeview, the city has a little something for everyone. Our guide to Chicago’s top neighborhoods will help you find the right match for you, and our list of Chicago’s best realtors will help you find the home of your dreams.

City of Chicago website Everything you need to know about living in Chicago. Chock full of useful resources, including information about the City of Chicago government, calendars of city meetings and events, important city terminology…

END_OF_DOCUMENT_TOKEN_TO_BE_REPLACED

Like any large city, traffic can occasionally be a frustrating part of life in Chicago, though nowhere near as bad as the sort of commutes synonymous with cities like LA and San Francisco. U.S. News and World Report ranked Chicago eighth in its latest list of the nation’s worst traffic cities, reporting that Chicago commuters spent an average of 60 hours in traffic in 2015. That’s compared to 81 in LA.

To avoid rush hour traffic, many Chicagoans rely on public transit to get to work, particularly if they work in the Loop or within city limits. The Chicago Transit Authority operates eight rail lines and 140 bus routes to get you around town, while the Metra offers 11 lines that connect the Chicago suburbs to the city. Other Chicagoans use the city’s bike lanes — and 19 miles of lakefront bike paths — to get to work.

If you’re moving to Chicago, you should be prepared for the city’s weather. As you’ve probably heard, winters in the Windy City can occasionally get very cold, though probably not as brutal as you might think. The city averages seven days a year where the temperature doesn’t climb above zero degrees. As for the white stuff, Chicago typically records its first snowfall of at least an inch in early December and the average annual snowfall clocks in at just under 40 inches.

On the flip side, summers in the city can get very humid, particularly in July and August. But toward the early and latter parts of the season, Chicago’s weather is tough to beat. Those are the days you’ll want to be sure to spend as much time outdoors as you can get away with.

Chicago’s economy has seen better days, though there are some signs of optimism.

In recent years, employment figures in the Loop, the city’s central business district, have been improving significantly — to the extent that Crain’s called it the nation’s “hottest urban center.” A number of major Chicago-area employers including Motorola Solutions, Kraft Heinz and ConAgra have been relocating their businesses from the suburbs to downtown. In 2016, McDonald’s announced they would be following that trend. 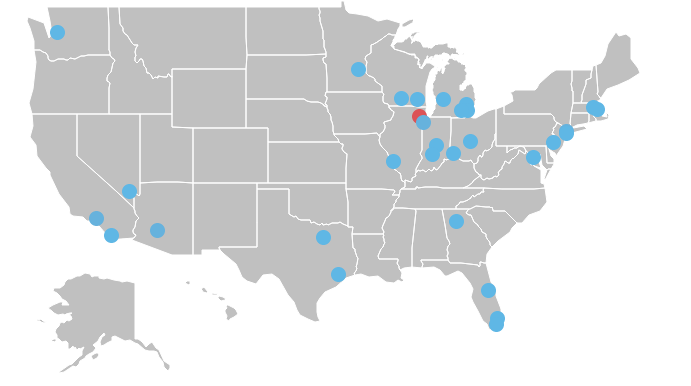 Where New Residents of Chicago Are Moving From

It appears that the Windy City is shrinking. The U.S. Census found that about 6,000 fewer people lived in the Chicago metro area in 2015 compared to 2014. Still, the metropolis boasts a population of…

END_OF_DOCUMENT_TOKEN_TO_BE_REPLACED

Museum of Science and Industry

Chicago’s museums are tough to beat, so you’ll never be bored.

Museum of Science and Industry

Chicago has long been recognized as one of America’s premier theater towns. Ranging from big-budget blockbusters to scrappy storefront productions, the performing arts come in all shapes and sizes at the city’s 200 different theaters.

If the daily grind starts to wear you down, Chicago offers plenty of spots to reconnect with nature — it’s home to some seriously beautiful and relaxing parks, many of which offer a plethora of free activities including concerts, movie screenings and more.

Chicago is recognized as the birthplace of a number of distinctive genres, including Chicago blues and house music, and its musical roots carry on today with jazz clubs, nightclubs and live music venues spread throughout the city to this day. There’s always a concert or DJ night to be found.

The City That Works, as Chicago is sometimes called, also knows how to kick back at neighborhood bars that range from swanky, award-winning craft cocktail bars to beloved dives.

Feeling hungry? You will never be short on dining options in Chicago. Home to more than 7,300 restaurants, Chicago offers a wide range of cuisines that reflects its diverse population. Whether it’s the city’s iconic fare like deep-dish pizza, hot dogs or Italian beef sandwiches or more adventurous fare like the Puerto Rican jibarito fried-plantain sandwich, Greek saganaki or Vietnamese pho, it will be tough to choose which craving you’ll want to satisfy on any given night.

It’s not all street food either — the city also boasts many Michelin-starred restaurants that offer tried-and-true, sophisticated fare.

The classic “Bill Swerski’s Superfans” SNL sketch isn’t based totally on stereotype. Chicago is a big sports town. Home to the Sox and the Cubs, plus the Blackhawks, Bulls and Bears (oh my!), the major professional sports are well-represented around town. In addition, the Fire soccer team is based in the suburb of Bridgeview and the Sky women’s basketball team is based in nearby Rosemont.

Here is where Chicago will really pull on your heartstrings. The festival season kicks off just after Memorial Day every summer with each weekend packed with sometimes a dozen or more offerings of events focused on art, music, food and more. Some of the more popular annual offerings include Blues Fest, the Taste of Chicago, the Pitchfork Music Festival, Lollapalooza, Northalsted Market Days and the Air and Water Show. You’ll want to be sure you stick around in the city as much as possible during the summer to take it all in.

Drawing on a legacy of many waves of immigration from Europe, the American South and Mexico over the past several centuries, Chicago is a true melting pot of different cultures and ethnicities today, including significant German and Polish populations.

A few other points of Chicago pride, per the City of Chicago’s website:

END_OF_DOCUMENT_TOKEN_TO_BE_REPLACED 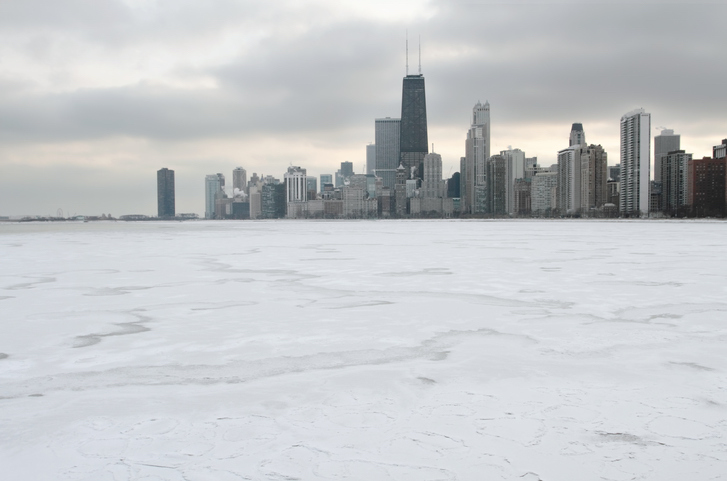 How to Survive Your First Chicago Winter

You’re not a true Chicagoan until you’ve survived your first winter in the Windy City—because that’s when you truly realize that the city’s most famous nickname doesn’t quite tell the whole story. You see, Chicago…

END_OF_DOCUMENT_TOKEN_TO_BE_REPLACED

How Big Is the Larsen C Iceberg Compared to Chicago?

An iceberg nine times the size of Chicago has broken free from Antarctica. The iceberg cleaved away on July 12 from an area known as the Larsen C Ice Shelf. The cleaving is a naturally…

END_OF_DOCUMENT_TOKEN_TO_BE_REPLACED 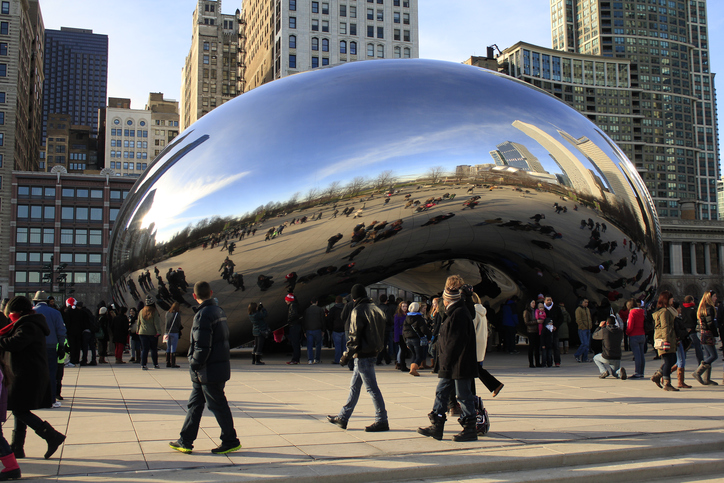 20 Things to Know Before Moving to Chicago

Ah yes, Chicago. The City of Big Shoulders. The Jewel of the Midwest. The Windy City. No matter what you call it, Chicago is a true American city with a storied past and a promising…

END_OF_DOCUMENT_TOKEN_TO_BE_REPLACED 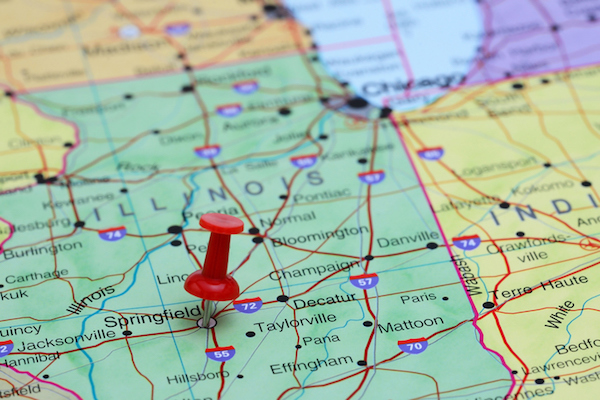 How Big is Illinois?

At 57,913 square miles, Illinois is a mid-sized state — in fact it’s precisely in the middle, ranking as the 25th largest US state by area. Surprisingly enough, were Illinois a country, it would also…

END_OF_DOCUMENT_TOKEN_TO_BE_REPLACED 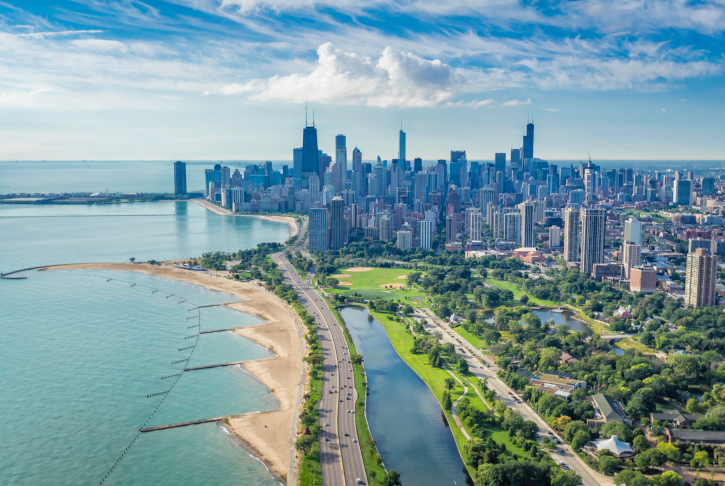 It should come as no surprise that Chicago is one of America’s favorite cities for tourists, locals and newcomers alike. Sure, the winters are notoriously harsh, but the glorious summers more than make up for…

END_OF_DOCUMENT_TOKEN_TO_BE_REPLACED 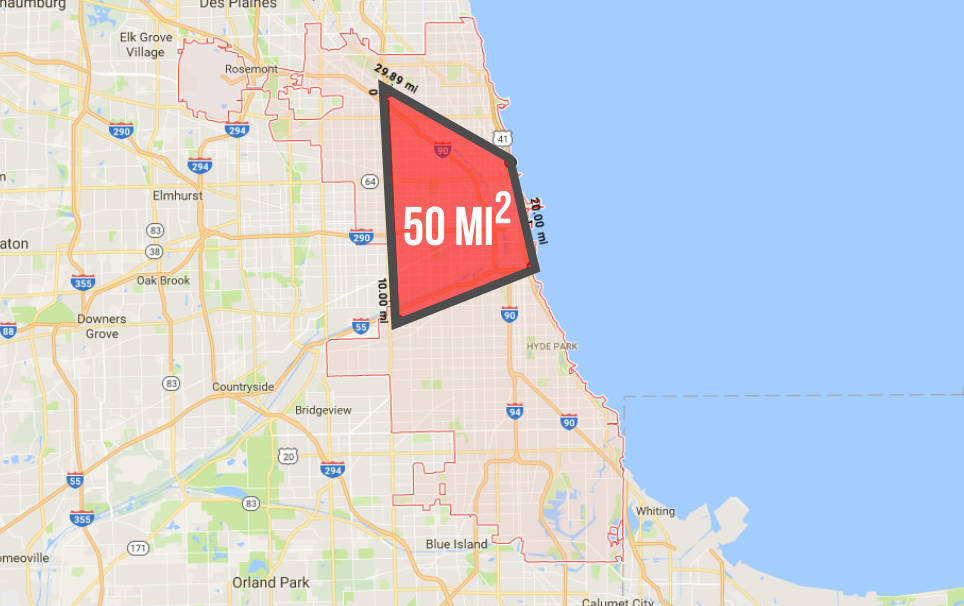 END_OF_DOCUMENT_TOKEN_TO_BE_REPLACED

Plan Your Move to Chicago With SpareFoot

Planning a move to Chicago? SpareFoot can help. Use SpareFoot to find special deals and discounts on Chicago Moving Truck Rentals. If you need a storage unit as part of your move, SpareFoot makes it easy to find storage units in Chicago too.

Eventually, I think Chicago will be the most beautiful great city left in the world.