Sure, plenty of cities sport storied pasts, but are there any quite as colorful as Chicago?

She is a city that burned almost completely to the ground, and was rebuilt; a city long seen as at the center of commerce and industry and a city where one of the NBA’s finest dynasties ever — led by Michael Jordan and Phil Jackson — reigned supreme.

Still, the Windy City has also seen a great deal of tragedy — boat disasters, bloody massacres — over the years, and from those moments of despair have blossomed any number of urban legends. Of course, some of these spooky stories are more rooted in facts than others, so let’s set the record straight where we can:

In 1992, the horror film Candyman set in Chicago’s (now demolished) Cabrini-Green public housing complex was a box-office hit. The film followed a graduate student writing a thesis on urban legends who learns of a local legend claiming that a murderous “Candyman” with a hook for a hand can be summoned by saying his names five times into a mirror.

While the movie is actually based on a Clive Barker novella based in Liverpool, the movie also appears to borrow from the real-life murder of Ruthie Mae McCoy, a resident of the Grace Abbott Homes project, in 1987. According to reporting from the Chicago Reader, McCoy was murdered after an intruder broke into her home through the medicine cabinet in her bathroom — the same circumstances as the death of a character named Ruthie Jean. 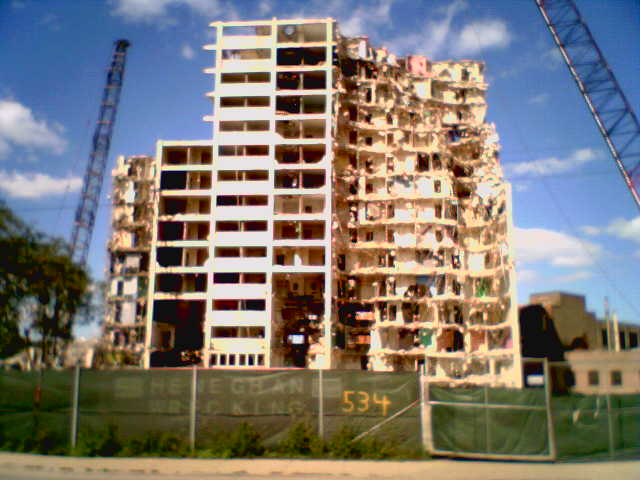 After the film was released, rumors surfaced that young people in Chicago — especially in the parts of the city that resembled the crumbling public housing complex featured in the film — were living in fear of seeing a real-life “Candyman” wandering their neighborhoods.

Director Jordan Peele is also in talks to make a modern version of Candyman, so get ready for talk of this urban legend.

If young Chicago residents weren’t living in fear of the Candyman in the early ‘90s, it may have been because they were too busy with the reported sightings of “Homey the clown.” In 1991, news stories claimed that a man was dressing up as Damon Wayans’ famous “Homey” character from the popular sketch comedy show “In Living Color”. The clown allegedly lured children throughout the city (and even in some suburbs) into a van using candy and money.

While some reports at the time stated that police were taking the claimed sightings seriously, others saw officials dismissing the reports as pure fiction. Still, the wave of spooky clown sightings in the city may not have stopped there. In 2008, schools were warning parents of another man dressed as a clown who was, again, attempting to lure children into vans.

The same year Chicagoans were seeing creepy clowns, Oprah Winfrey’s original talk show was still on the air and taping episodes from Harpo Studios on the city’s not-yet-hip West Loop.

Harpo was long believed to be haunted because the building previously operated as an armory building where the bodies of many of the 844 passengers and crew who were killed in the 1915 Eastland disaster on the Chicago River were taken there. Over the years, some staff members reported hearing unexplained footsteps, whispers and old-timey music, not to mention a full-bodied apparition who’s been dubbed the “Gray Lady.”

Today, the building that once housed Harpo is now home to McDonald’s brand-new Chicago flagship restaurant. So, would you like fries with your haunting?

From a woman in gray to one in white, one of Chicago’s most famous urban legends is Resurrection Mary. As the story goes, men driving past Resurrection Cemetery just outside city limits in the town of Justice claim they’ve been seeing a young female hitchhiker wearing a white dress there since the 1930s. When the drivers pick up Mary, however, she reportedly vanishes into nothingness.

Some believe that the story of Mary can be traced back to Mary Bregovy, a young woman who died in 1934, or possibly another girl, Anna “Marja” Norkus who was killed in a car crash nearby — but nobody knows for sure.

The Devil Baby of Hull House

While Mary might be Chicago’s most well-known urban legend, there is arguably no local story that is spookier than the long-held rumors of a “devil baby” held at Hull House, a settlement house helmed by Jane Addams on the city’s West Side. In 1913, it is claimed that a Chicago woman gave birth to a child born with horns, hooves and a tail and brought him to Hull House, where a baptism was attempted and the baby was locked in the building’s attic.

Thousands of people learned of the rumor and came to Hull House in order to see the demon child with their own eyes and the story became so famous that it is said to have inspired author Ira Levin’s book and eventual film “Rosemary’s Baby.” Through it all, the facility’s residents and volunteers insisted that such a baby did not exist.

Still, rumors have persisted for years — and some insist that you can still sometimes see the “devil baby” itself in the upper windows of the house, which operates today as a museum.