Colorado Springs, CO, is a melting pot of the West. Everyone who visits — 5 million people a year — seems to want to move here. With lavish blessings of sunshine, grand natural beauty and everything a big city offers but in a smaller package, it’s no wonder. But there are some things you need to know before you think you’re moving to Shangri-La.

1. Get an altitude adjustment.

At 6,000-plus feet in altitude, it’s higher than the Mile High City of Denver. The air is thinner. It takes some people a few days to adjust. Some take longer. Lightheadedness and difficulty breathing after exertion are common at first. Give it time. And just wait till you go back to sea level — you’ll feel like a superhero.

Break out the lip balm and pour another glass of water. This is the high desert, with average precipitation of just 17 inches a year. Our average humidity hovers around 50 percent, but it’s been known to drop to single digits.

Always have a jacket handy. A summer or fall day can transform into a really chilly night, with a 50-degree drop in temperature. And someone wearing shorts in the city might need a parka on top of adjacent Pikes Peak. It can snow on the peak during every month of the year.

It goes against everything we learned in school, but there’s no apostrophe in Pikes Peak — or any other peak in the Rockies. It was a government decision years ago, and we’ve learned to live with it.

Because we’re a city of transplants, we have drivers who can’t drive in rain (Texas) or snow (Texas again). Those who can (Minnesota) have no patience with those who can’t. Just take it easy and assume no one is going to obey the rules of the road. After all, they don’t do it like that in (name your state here).

Be warned that there’s little rhyme or reason in the naming of streets. More than one street may have the same name. A street may dead-end and pick up a few blocks away. Avenues and streets were randomly named — possibly by how it sounded? If you do get turned around or lost, just look to the horizon. The mountains are always on the west, and that might help re-orient you. After living here, you’ll be lost elsewhere without your directional foothills.

You’re going to see a lot of things named after the city’s founder, Gen. William J. Palmer … Palmer High School, Palmer Park, Palmer Lake and so on. But there also are a lot of things named after Spencer Penrose, the founder and builder of The Broadmoor Hotel. His philanthropic legacy (thanks to wife Julie) left lots of institutions named for him — Penrose Hospital, Penrose Library and Penrose Stadium, for example.

They mean well, but the geographic complexity of where we live means it’s hard for meteorologists to predict Mother Nature. It’ll be sunny and 60 degrees one minute, snowing like mad the next. We can get a blizzard with a foot of snow when “flurries” are predicted, but that’s OK. It’ll melt off completely in a day or two of sunshine. (We get 300 days of sunshine a year.)

Listen up. Copy the way real locals say the Spanish and French names for streets and such. Tejon is “tay-hone,” not “tee-john.” And just about everyone butchers Cache la Poudre, but try saying it like this: “Cash la poodrah.”

There are no flower beds here. Think of the Garden of the Gods as a rock garden — stunning red sandstone eruptions with fanciful names like Kissing Camels and the Three Graces. This city park feels more like a mini-national park, with great paved walking paths surrounded by scrub oak and piñon trees, plus the occasional bear or mountain lion — all in the middle of the city and with stunning views of Pikes Peak.

With a few exceptions, you’re not going to see much high fashion here. People often go to the symphony in jeans and fleece. For us, great clothes come from REI or Bass Pro Shop. There are a few upscale department or boutique stores here, but they often don’t carry the trendiest stuff, since no one buys it. If it’s high fashion you seek, head to Denver. It’s just an hour north.

Standing sentinel over the city is Pikes Peak, known as America’s Mountain. The view from the top inspired the words to “America the Beautiful.” You can drive up to its 14,110-foot summit. Or you can take a cog railway train. If you’re up for it, you can hike up Barr Trail. Some crazy folks even ride up on a bike — or just do the downhill part of the trip, which isn’t as easy as it might sound.

You’ll see lots of men and women in uniform everywhere you go. Military installations surround the city. Among others, there’s the U.S. Air Force Academy to the north, Fort Carson to the south, NORAD to the west and Peterson Air Force Base to the east. Lots of places, from restaurants to movie theaters, offer military discounts.

Colorado Springs and surrounding El Paso County tend to be pretty conservative, at least politically. Even Democrats run as Republicans! But there are distinct pockets of liberals, if you want to find them.

15. Watch out for athletes.

You’re taking a leisurely stroll in the Garden of the Gods and, suddenly, a swarm of fast-moving cyclists buzzes by. No, you’re not being attacked by a Spandex-clad gang; you’re just witnessing athletes prepping for the next Olympics. The main U.S. Olympic Training Center is located here, so athletes of all kinds come to train at high altitude to increase their stamina.

Colorado Springs regularly ranks as one of the fittest cities in the U.S. We love our great outdoors, and hiking probably is the No. 1 sport. One of the hottest local attractions is the Manitou Incline, a one-mile climb with a 2,000-foot gain in elevation. It’s steep! Railroad ties give you stability on the trail, though.

The Pikes Peak region hosts many conservative religious organizations, such as Focus on the Family and other evangelical groups. But the “City of Churches,” as it once was named, also fosters moderate and mainstream churches catering to many faiths.

18. You can get a Rocky Mountain high.

Yes, both medicinal and recreational marijuana are legal in Colorado, but the laws governing their sale and use are pretty strict. Don’t get caught smoking it in public or driving under the influence. And don’t take it out of state. Not to be paranoid, but they’re watching you.

We don’t always love the traffic and the congestion at local restaurants and attractions, but tourists (mostly May through September) provide a huge boost to the local economy. So be patient. That guy trying to turn left from the center lane? He’s probably got a California (or Nebraska or Kansas) license plate. He’s lost and trying to find Cave of the Winds. Let him in.

It comes upon you gradually. You always carry a jacket in your car, and you always have water and sunscreen handy. You avoid rush hour by not driving anyplace unnecessary between 4:30 p.m. and 6 p.m. You’ve driven visitors up Pikes Peak so many times, it doesn’t even scare you anymore. And you always have a guest room ready. Because if you live here, they will come.

Linda is a writer based in Colorado Springs.

20 Things You Need to Know Before Moving to Colorado Springs

Colorado Springs, CO, is a melting pot of the West. Everyone who visits — 5 million people a year — seems to want to move here. With lavish blessings of sunshine, grand natural beauty and…

END_OF_DOCUMENT_TOKEN_TO_BE_REPLACED 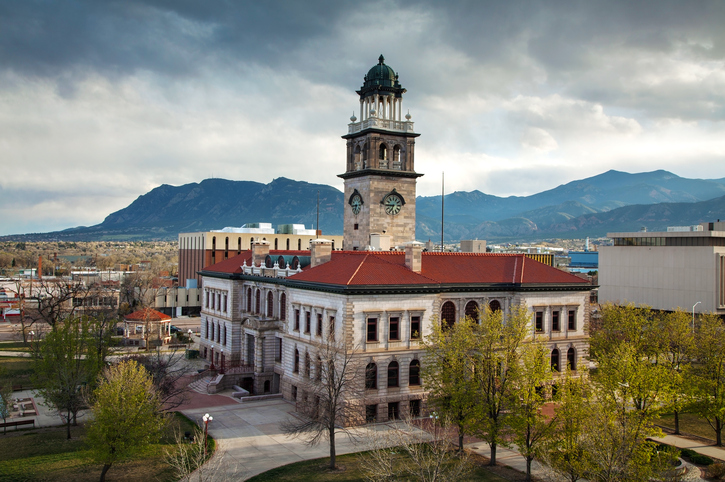 Where Everybody in Colorado Springs is Moving From

Maybe living a mile high isn’t enough for you. If so, drive about an hour south of Denver to Colorado Springs, which is 6,035 feet above sea level, or 755 feet higher than Colorado’s state…