Americans may be losing their desire to move anywhere according to the latest statistics from Move.org.

But if you live in Denver, it sure doesn’t seem that way.

According to the Move.org recent report, just 11 percent of U.S. residents indicated they moved in 2017, the lowest percentage since 1948 when the U.S. Census Bureau began keeping records of moving demographics.

However, Colorado continues to be ranked in the top 10 when it comes to preferred destination states for Americans to start anew. Colorado is #10 on the list of states favored as a new home. Western states Idaho and Nevada are #1 and #2.

Denver’s burgeoning population of over 700,000 is proof of the Mile High City’s popularity. The U.S. Census Bureau reported in April that Denver is home to 716,492, an increase of 116,334 people since 2010. According to U.S. News and World Report (2018), Denver ranked #3 in the United States as the most desirable place to live among large metropolitan areas.

Denver has much to be desired. From its views of the Rocky Mountains and Front Range foothills, to superb weather, to the booming economy and vibrant downtown area that attracts millennials, it’s no wonder people have been flocking to this urban community. The city is awash in new businesses, from startups to relocation of corporate offices. In turn, those businesses either bring their employees to the Mile High City or attract a new workforce.

Higher education also attracts many new people to Denver. With the University of Denver, Metro State, University of Colorado-Denver and the CU Medical School all in the Denver area, tens of thousands of students call the region home.

If you’re considering a move to Denver, keep in mind these points before you head to the Centennial State.

At 5,280 feet (hence the Mile High City) above sea level, you’re likely to feel the effects of oxygen deprivation. You’ll initially find yourself short of breath, especially when climbing a set of stairs or going for a jog. It may take several weeks of general fatigue (and some headaches) until you acclimate. Remember to drink a lot of water and stay hydrated, and limit the number of alcoholic drinks.

Denver’s semi-arid climate is often a shock to people moving here from the East Coast, Midwest or Southern United States. There’s no getting around how dry it is here, especially in the winter.  The relative humidity is typically below 20 percent and your skin will rapidly experience the effects. Make sure to stock up on lip balm, lotion and invest in a humidifier (not a dehumidifier) for your home.

Also, Colorado is blessed with over 300 days of sunshine each year. During the summer, expect bluebird skies in the morning and often times, clouds and thunderstorms (or just dark clouds and lightning) in the afternoon. The weather can change quickly and dramatically, regardless of the month, so keep your car stocked with extra clothes, jackets and appropriate footwear.

Despite its convenient light rail and bus service, Denver suffers from clogged streets and highways like other major cities in the U.S. WalletHub came out with the best and worst cities to drive in and Denver ranked a sad 70th. However, it did manage to beat out Albuquerque, Long Beach, Calif., Portland, Ore., and North Las Vegas, to name just a few western cities. While driving can sometimes be challenging, remember good public transportation does exist along with car sharing opportunities.

According to the Federal Housing Association, Colorado ranks 5th for highest home appreciation in the country. But with appreciation has come higher residential home prices. The median price of a single family home in Denver is now nearly $470,000, compared to $410,000 just two years ago. However, despite the elevated prices, there are many attractive loans and down payment options on the market that can make becoming a homeowner a reality. The Colorado Housing and Finance Authority (CHFA) offers financial resources to help first time home buyers with down payment assistance. These packages have enabled over 100,000 Coloradans to achieve homeownership, according to CHFA.

If you’re getting ready to buy or rent in Denver, Usaj Realty is a boutique real estate company that specializes in Denver neighborhoods.

The rate of unemployment in Denver is among the lowest in the nation. As of July of 2019, it was at 2.8%, almost a full point below the national average. The city of Denver offers various incentive, tax credit, loan and training assistance programs that have helped firms expand in the city. In addition to the downtown area, you’ll find many business centers throughout town including the Denver Tech Center, Cherry Creek and RiNo, to name just a few.

If you’re looking for a truly hip place to call home, Denver is your place. The city is a great place to live thanks to its plentiful sunshine, invigorating outdoor activities, strong neighborhood character, and a myriad of independent businesses, including oodles of coffee shops, restaurants, and breweries.

This outdoor mecca attracts outdoor enthusiasts of all kinds — skiers, snowboarders, rock climbers, hikers, cyclists, kayakers and runners — to name just a few. Denver and its neighboring cities offer countless opportunities to pursue the activity of your choice. Colorado ranks #1 as the most fit state in the nation, according to exercise.com. Furthermore, WalletHub ranks Denver the  #8 best city for pursuing an active lifestyle.

But How Much Will it Cost You to Live in Denver?

Denver ranks 13th in cost of living index in North America, according to Expatisan. However, Denver is much cheaper than many large cities like Los Angeles, Boston and New York. Furthermore, many residents feel the lifestyle that Denver affords them negates the higher costs of goods and services.

If you’re getting ready to buy or rent in Denver, Usaj Realty is a boutique real estate company that specializes in Denver neighborhoods. 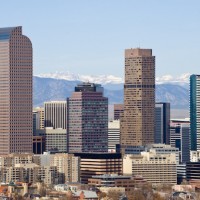 Moving to Denver? Here’s What You Need to Know

Americans may be losing their desire to move anywhere according to the latest statistics from Move.org. But if you live in Denver, it sure doesn’t seem that way. According to the Move.org recent report, just…

END_OF_DOCUMENT_TOKEN_TO_BE_REPLACED

Why You Should Think Twice Before Moving to Denver

Denver has plenty going for it: progressive and innovative thinking; beautiful scenery; a healthy economy with an unemployment rate below 4 percent; many arts, culture and professional sports offerings throughout the year; and, of course,…

END_OF_DOCUMENT_TOKEN_TO_BE_REPLACED

Everything You Need to Know About Moving to Denver

Denver is a vibrant city, welcoming to entrepreneurs and startups, supporting new bars and restaurants, attracting many companies from out of state and convincing existing businesses that it’s safe to invest in growth. Many thank…

END_OF_DOCUMENT_TOKEN_TO_BE_REPLACED

The 14 Most Haunted Places in Denver

Denver, founded in 1859, has had almost 160 years to produce scary places and urban legends that make the hair rise on the back of your neck. Ghost hunters and paranormal investigators have plenty to…

END_OF_DOCUMENT_TOKEN_TO_BE_REPLACED

5 Plants You’ll See Everywhere When You Move to Denver, CO

When adding native plants to your new home in Denver, Colorado, you must consider the type of the plant and time of the year in which it thrives in. A lot of native plants don’t…

END_OF_DOCUMENT_TOKEN_TO_BE_REPLACED

All the Reasons You’ll Love Living in Denver

If you’re looking for a city that’s full of fun, food, friends, and favorable opportunities, Denver could be your perfect home. The city is laid back, full of adventure, and ranks in several positive categories….

END_OF_DOCUMENT_TOKEN_TO_BE_REPLACED

The Denver metropolitan economy saw the fourth-highest rate of growth among the 20 largest US metros between 2011 and 2016 according to an analysis of recently released economic data conducted by SpareFoot. In 2011 the Denver-Aurora-Lakewood,…

END_OF_DOCUMENT_TOKEN_TO_BE_REPLACED

7 Songs to Listen to If You Are Moving to Denver

Be sure to add these songs about Denver to your playlist for your move to the Mile-High City: 1. “Rocky Mountain High” by John Denver 2. “Things To Do In Denver When You’re Dead” by…

END_OF_DOCUMENT_TOKEN_TO_BE_REPLACED

How Big is Colorado?