Beaches. Mojitos. Crockett and Tubbs racing along the ocean in a slick cigarette boat.

Sure, that’s all part of Miami’s wild and sultry image. But most people who move here are surprised to find that Will Smith left out quite a bit in his ode to the 305.

“Everybody party all day, no work, all play, ok?” Eh, not quite Will.

But the guide below will help fill in some of those blanks and pull back the curtain on what really makes the Magic City sparkle. 1. The City of Miami isn’t as big as you might think.

It’s about 55 square miles, actually. What most people consider Miami is actually Miami-Dade County, which is made up 35 different municipalities including Miami Beach, Key Biscayne, Coral Gables, South Miami and Hialeah.

2. Finding an address is pretty simple. Just remember to PARC.

The county is organized in a near perfect grid, with streets running east to west and avenues running from north to south. Wondering what alternative names constitute an avenue? Use PARC––all addresses ending in place, avenue, road or court run north to south. Anything else flows like a street.

3. PARC does not apply in Coral Gables. Or Hialeah.

They’re “off the grid,” so to speak. In the Gables, you’ll have to become familiar with street names. (Pro-tip: look down. The street signs are small white slabs that sit on corners). Hialeah runs on its own number system. Google Maps and Waze are your friends here.

It’s the preferred mode of transportation here. While public transportation and taxis are available in certain parts of the county, it’s inefficient and scarce––which is incredibly frustrating for anyone who needs to be at work on time. 5. The drivers here will take some getting used to.

We like to lay on our horns, “forget” our turn signals, roll through stop signs and gesture wildly to the car next to us. Remember, young padawan: “woosaaaaah.”

6. Our winters are the envy of the entire country.

More than a few tourists visiting our city in the winter have been pulled in by its low humidity, 70-degree temps, and not-a-cloud-in-the-sky sunny days. And yes, from November to April, it’s downright glorious to call Miami your home. But (you knew there was going to be a “but,” right?)…

And that runs from June to November. The city watches the tropics with a sharp eye and locals start stocking up on their hurricane supplies––canned foods, bottled water, batteries, rum, flashlights, etc. The natives get a jump on this early because they know that those who wait for an actual hurricane warning usually end up with the rogue cans of pickled pig snout left over in the grocery store. Remember those crystal clear winter days? During the summer, expect a torrential, rainforest-style downpour every single afternoon around 3 p.m.

9. The rainstorms here are a lot like Cuban coffee.

A little goes a long way. After a powerful 20-minute deluge, the sun is almost guaranteed to pop right out again. Oh, you do know what Cuban coffee is, right?

It’s true. The City of Miami issued a proclamation back in 2012 making 3:05 p.m. its official “cafecito” time. And it revolves around the tiny thimble of caffeinated rocket fuel known as Cuban coffee. It’s hot. It’s sweet. It’s delicious. And it’s more powerful than an entire pot of American coffee. Proceed with caution. 11. Flip-flops and sandals are the unofficial shoe here.

We embrace the open-toe look just about everywhere––running errands, shopping, grabbing some drinks at the bar, dinners out. Well, everywhere except for the gym. Safety first, and all.

12. Our fashion is as colorful and outspoken as our locals.

We’re not afraid of showing a little skin and embracing some racy hues. Have you ever tried wearing a black wool suit on a 90-degree day that’s clocking in at 85% humidity? Exactly.

13. Yes, you really can dance here for 24 hours straight. 14. The city comes to a complete standstill once a year.

And it’s called Art Basel (pronounced: bah-zuhl). Galleries, artists, celebrities and models from around the world converge upon Miami and Miami Beach for a week of shows, events, dinners and of course, parties. A typical 15 minute drive along the MacArthur Causeway has been known to take over two hours during Basel. Consider yourself warned.

15. We’re poised to become the next great foodie town.

A decade ago, there wasn’t much to talk about when it came to the city’s drinking and dining options. But that’s changing––quickly. So while you can find a place to party and dance 24 hours a day, most locals are opting to dip into some high-end cuisine from world-renowned chefs (David Boulud, José Andrés, Jean-Georges Vongerichten) and culinary powerhouses that have competed on Top Chef, Chopped and Best New Restaurant.

16. Saying ‘hi’ to someone you don’t know will get you some odd looks.

We can appear to be a bit standoffish or clique-ish, often reserving our warm embraces and boisterous greetings for friends and families. But once someone has introduced you to his or her inner circle, prepare yourself for some lifelong friendships. 17. We’re a microcosm of the Caribbean and Latin America.

Throughout the course of your day, it’s not uncommon to run into a Cuban, Colombian, Venezuelan, Brazilian, Haitian, Nicaraguan, Dominican, Puerto Rican and a Chilean. And you’ll find their cuisines and customs imprinted upon the city. It’s a beautiful thing, really.

18. A kiss on the cheek is our casual greeting of choice.

Don’t be surprised when someone immediately offers you their cheek upon introduction. Sometimes, they’ll even go in for a smooch on both sides.

Spanish isn’t necessary, but it sure does help.Knowing the basics will help you get around and endear you to most of the locals. 20. Prepare to vanquish the word “bored” from your vocabulary.

We’ve got professional football, baseball and basketball teams, world-class museums, miles of coastline for windsurfing and jet skiing, warm waters for deep sea fishing and scuba-diving, acres of marshy Everglades land to explore via air boat and…what? You didn’t think you’d be tanning on a lounge chair all day, did you? 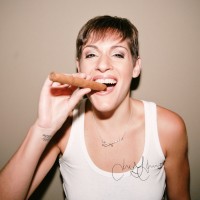