There is a zombie lurking in unit 83.

That is the premise behind a new six-issue comic book series called Self Storage coming out this month. The story follows a storage auction hunter named Chris, who ends up finding an undead woman named Jessica inside a unit he bought.

The comic, or graphic novel if you prefer, is published by 451 Media Group, a new company launched by director and producer Michael Bay. The comics coming out of 451 come with a technological twist: a special ink that can be scanned by smartphones and tablets to unlock additional content and animated scenes. (You can check out a preview of the comic here.)

Being obsessed with all things storage-related, we tracked down the creator of the comic, Clay McLeod Chapman. Chapman grew up in Richmond, VA where he started his career as a short story writer, novelist and playwright.  Since then he has moved to Brooklyn, NY and has expanded his creative pursuits to include film, podcasting and comic book writing.

Read on to find out what drew Chapman to self-storage, what makes his zombie story different from all the others, and what dark secrets he is hiding in his own personal storage unit. 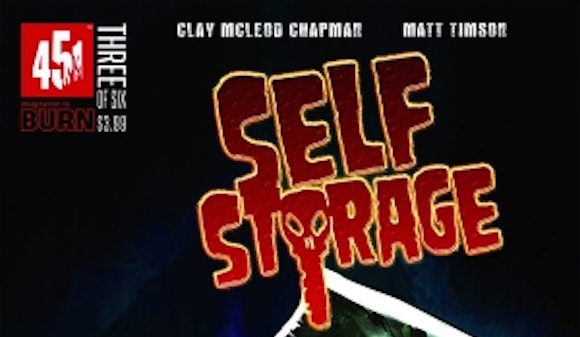 What inspired the story? What drew you to set it around a self-storage facility?

I totally owe it to a friend of mine, an old pal from Richmond named Chris Smith. The lead character of the comic is a guy named Chris Smith, that’s me giving thanks to him for giving me the idea.

One Saturday afternoon Chris had to go to his storage unit to pick up some stuff there. Walking along these really symmetrical long corridors, nothing but unit after unit, we started chatting about how unnerving those spaces are. You don’t want to be stuck in a self-storage facility at two in the morning.

So this idea has been kicking around in your head for a while, how did it get end up getting revived as a comic book?

We had been talking about making it into a film; the concept of a zombie epidemic starting in a self-storage facility. One of the people at 451, this fella named Anthony Gentile, had heard of the project a while back. When 451 started gaining momentum they started looking for projects from writers they had encounters with in the past.

He asked if anything happened with the storage unit story and if I wanted to turn it into a graphic novel. I jumped at the idea. 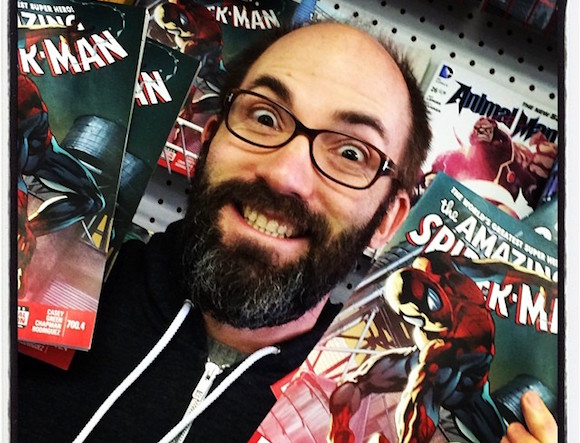 What makes this different from the comic books you worked on before?

I’ve been cutting my teeth in comics for a couple years writing for Marvel and Vertigo. I did some Spiderman issues. This is an opportunity for me to do my very first longform graphic novel arc, not based on a preexisting super hero. They gave me the freedom to tell the story I wanted to tell, and set me up with an amazing artist Matt Timson.

Zombies have become a huge pop culture phenomenon. Have you always big fan of the genre?

I’m totally obsessed. I have to come clean, I am a die hard horror film fan.  I could spend the rest of my days writing schlocky crappy horror movies if someone gave me the keys to the car.

People have this kind of statement that there is no more blood to squeeze from the stone, that zombies are done and dying out. Yet every few months there is something new that sates people appetite, Fear the Walking Dead was just one of the most watched cable shows ever, and that trumps even the Walking Dead.

That appetite is kind of astounding, and I am bewildered about it.

What is your approach to the zombie genre that is different from all the others?

My approach to the zombie phenomenon, rather than go big or go epic, is to go personal.

The great thing about self storage units is that they are a place to put things that you should let go of, but there is a strong sentimental attachment. My take on that is someone who is dead, or undead, and you are not willing to let go of them. How does that sentimentality keep you from doing the right thing and dispatching of said zombie rather than locking them up in the storage unit?

There is no way we can trump Dawn of the Dead or Night of the Living Dead. Those movies have solidified the foundation for the rest of us to riff off of.  So that’s why I decided to tighten the aperture and focus on a more personal story.

Some zombie films have been interpreted as criticism of American consumerism and other societal issues. Does your story touch on any of those aspects?

I grew up watching those movies, that was my fodder. The durability of the metaphor of zombies, is that you can adhere the metaphor to a lot of societal ills. I want to use the metaphor to talk about the possessions we hold onto and the things we let of.

I have to ask, do you have a self-storage unit? What’s inside it?

I got one here in Brooklyn. I have all of my books no one has been willing to buy. Boxes and boxes of books, I try to sell on the road. If you ever needed a copy of rest area, I got plenty just collecting dust. I can’t let go of them..