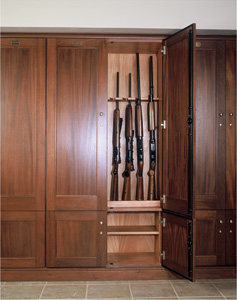 Since my last blog post concerned emergency food storage, specifically for zombie-related emergencies, it’s time to discuss the other essential component of surviving a widespread zombie infection: Munitions. While some storage facilities have rules against storing food, almost all facilities have de facto restrictions on storing explosives, including ammo.

It’s tough for gun enthusiasts who are unable to keep their guns with them— including students living on campus, people living in multifamily housing that don’t allow firearms, and members of the military on deployment. Numerous threads on gun forums, discuss the idea of keeping guns in storage facilities, occasionally identifying a local facility that allows guns, but usually coming up empty-handed. At the end of the day, most facilities don’t allow firearms. But a number of stateside storage facilities have adopted a lax attitude –  sort of a “don’t ask, don’t tell” policy – toward firearms, and a few even cater to those looking to store guns.

Elmwood Self Storage has just one facility in New Orleans, but it’s a pretty spectacular one. Opened in 2004, this three-story facility boasts an awesome walk-in wine cellar and over 100 security cameras. But most importantly, it has custom-built mahogany gun cabinets that are accessed via biometric (fingerprint) scanning. The whole thing is super secure: “All located behind a $10,000 stainless steel bank vault door.” And they even offer 24-hour access for an additional fee.

Similarly, Pacific Hwy Storage in San Diego, CA, offers general storage units, wine storage, and “vault storage.” Vault storage is very similar to a safe deposit box in that it is intended to store all manner of valuables, and requires two keys – the tenant’s and the manager’s – to access. Unlike safe deposit boxes at your local post office, Pacific Hwy Storage allows firearms to be stored (but no ammunition, their website notes).

These three companies are part of a very small handful of self-storage facilities that not only allow but advertise storing guns at their facility. If you are unable to store your collection at your home, a friend’s house, or a local gun shop or shooting range, consider calling around to storage facilities to inquire about their policy on firearms. Be sure to get a climate-controlled unit — guns are so sensitive to humidity that they (like antiques and fine art) automatically justify climate control. Lastly, properly oil your guns and buy a waterproof bag specifically for firearms to ensure they stay rust-free during their time in storage.

Tony writes columns about the best way to store commonly-stored items. He also writes about marketing, technology, and other fun stuff like zombies and IKEA furniture.