Moving with a cat can be challenging.

If you let your kitty roam the car, she may crawl under the driver’s seat and hide until she creeps out later to curl up on the brake pedal.

Don’t worry, though. There’s no need to get your back arched up over moving with a cat. Pounce on these tips to make moving with your cat as painless as possible. 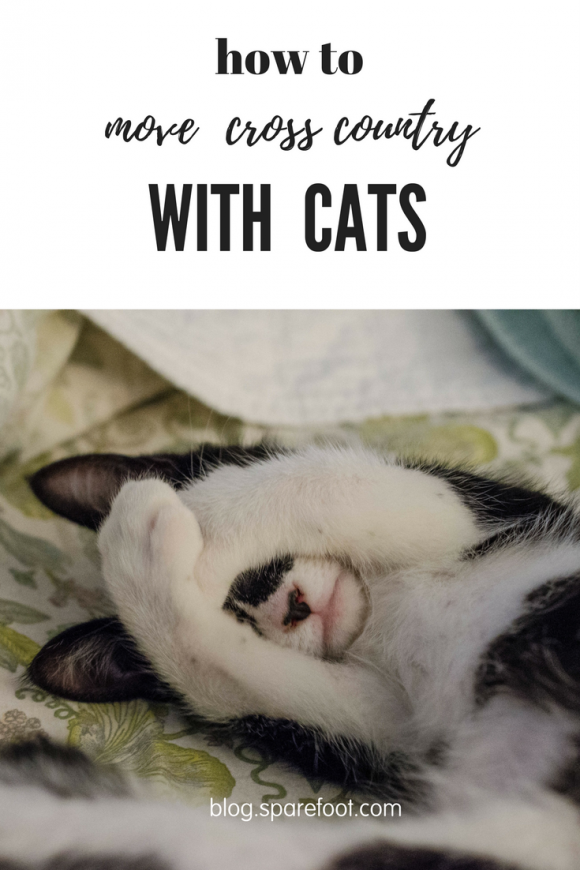 You need to be “very strategic” with cats when moving, says Amy O’Brien, who relocated from Kansas City, MO, to Denver in March. O’Brien placed carriers for her three cats around the house a month ahead of time to acclimate them to the temporary transport homes. 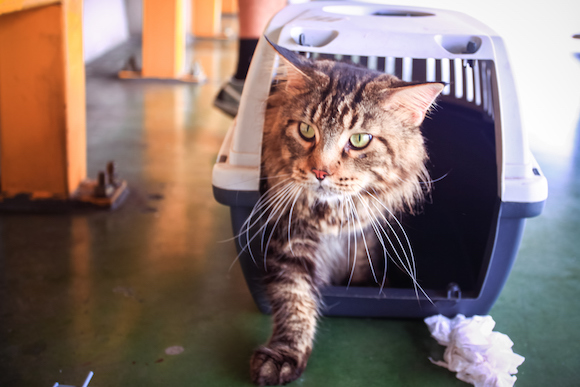 Sam Gooch has transported 25-30 cats 1,800 miles to Sherwood, OR, several times for a Kansas City area animal rescue. She uses 36-inch wire metal dog crates, removes the detachable divider and places it sideways as a shelf.  “It makes more space, and the cat can get up higher,” says Gooch.

Gooch sprays Feliway Pheromone Travel Spray For Cats on bedding to reduce cat anxiety while traveling. Holistic pet physical therapist Sally Morgan likes to use Safe Journey Botanical Animal Flower Essences for a few days before and after the trip.

“It’s for fear of motion and helps with nausea also,” says Morgan.

4. Be Careful With Doors.

Movers and other people will be clomping in and out at both your current home and future  destination so post signs on doors announcing the presence of a cat so he doesn’t escape.

“The area is not familiar so even an outdoor cat will not be safe until he has had some quiet time in the new place to explore the house and then the yard,” says Morgan. You might want to keep your cat in its carrier until the commotion of moving is over.

Another way to soothe kitties is the Tellington Touch technique, which uses circular movements of the fingers and hands all over the pet’s body to reduce anxiety, according to Morgan.

“The ears have many acupuncture points, and working on the ears can give the cat a lot of relief from nausea and car sickness,” she says. (See a video demonstration here) 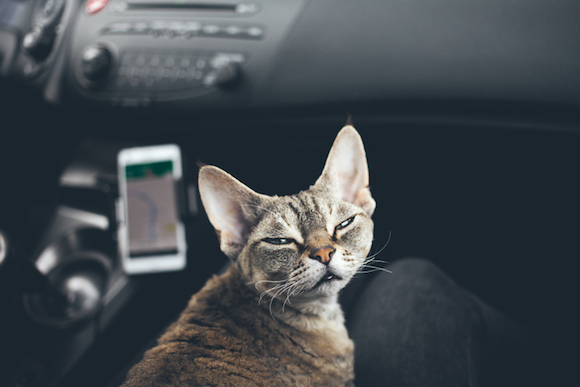 6. Employ The Lull of The Highway.

O’Brien skipped music and allowed only the vibration of the highway to lull her kitties to sleep for the nine-hour drive.

Get a small, travel-sized litter box, and let the cat use it before the trip so the box has a familiar smell, says Morgan. Bring a good supply of dog poo bags for easy litter box cleanup.

Bring the cat’s bed or a towel that smells like you and the old home to her spot in the new house. Familiar smells help keep the cat calm.

Gooch puts food and water in small containers typically used for fast food condiments to avoid messy spills. She stops every few hours to give cats a spoonful of wet food for moisture to ensure they stay hydrated.

Make sure your cat is wearing a collar at all times with updated contact information,  including cell number and destination address. It’s a good idea to get your cat microchipped before the trip as well.

Just because your cat loves to curl up in sunny spots at home doesn’t mean he wants the sun beating down on his crate in the back seat. Keep the crate out of direct sunlight, says Morgan.

In your new place, put your cat’s towel or bed next to your bed as usual. Provide fresh water near his bed, since he may need it nearby in an unfamiliar place. “It’s great to have a room mostly put together with some familiar furniture so they have a safe place to hide during the commotion of unpacking,” says Morgan.

Make sure that house plants, even non-toxic ones, are away from the cat’s crate for the trip so she won’t chew on plants that are harmful or upsetting for digestion, says Morgan. Check for any poisonous plants that may be blooming in your new home’s garden beds.