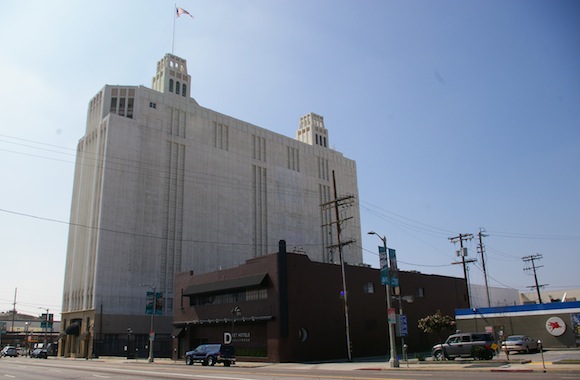 The sign on the door is the only clue to the treasure trove of entertainment artifacts, nostalgia and history locked inside the iconic Hollywood skyscraper.

Whether it’s the recordings of Beatles and Elvis or films by Alfred Hitchcock and Steven Spielberg, this 14-story skyscraper from the Golden Age of Hollywood is a literal time capsule of Tinseltown. Some even say it’s the birthplace of America’s self-storage industry.

“It was big and iconic, almost like an advertisement,” Trosko said. “That’s why people build tall buildings. It’s an advertisement. I see it as freedom and mobility. Put your stuff here and you won’t have to worry about it—we’ll take care of it.”

“It’s also fascinating that [the developer] also built Grauman’s Chinese Theatre. I think it was just part of the magic that was happening here in the ’20s and ’30s of innovation, modern thinking, and the influx of money, opportunity and weather—almost like a utopia in a way,” he added. “The building helped facilitate people’s dreams to be mobile.” 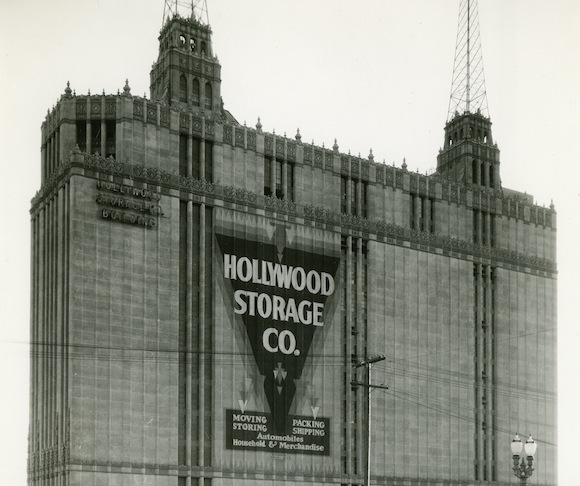 Construction on the Hollywood Storage building started in 1925.

Storied Past
The grandson of the building’s developer—Charles E. Toberman, also known as “Mr. Hollywood”—and a local historian say the historic structure at Highland Avenue and Santa Monica Boulevard has quite a storied history.

Over the decades, it has stored costumes worn by actresses Carole Lombard and Marlene Dietrich, the TV show collection of comedic actor Sid Caesar, the pork-pie hat worn by silent film star Buster Keaton’s and the chariot used in the silent version of “Ben-Hur,” to name just a few of its treasures, according to Richard Adkins, collections manager at the Hollywood Heritage Museum, and various media accounts.

“Inside Iron Mountain’s 14-story, art deco building, the most imposing structure on an otherwise nondescript block, Elvis, the Beach Boys and the Beatles all share space, along with Alfred Hitchcock and Spielberg,” according to a 2013 story in the Boston Globe.

Development Boom
The Hollywood Storage building has its origins in the birth of the motion picture industry in L.A. in the early 20th century.

Toberman was born in Texas, where he began his career as a stenographer. He moved to Los Angeles in 1902 and worked in a variety of jobs, including city treasurer of Hollywood. 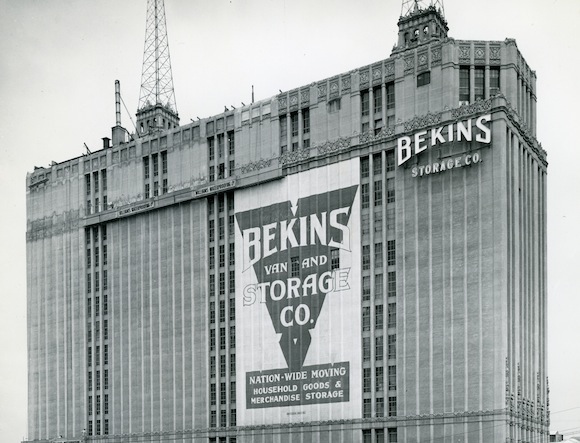 In 1907, he went into the insurance and real estate business and began developing real estate, said his grandson, Bruce Torrence, a retired banker and owner of HollywoodPhotographs.com who lives in Mammoth Lakes, CA.

“At the time, it was very much a rural community, even as he developed real estate,” said Torrence, who’s 74 years old. “He started developing more and more, and some of his most significant buildings that he built were Grauman’s Chinese Theatre, the Egyptian Theatre, the Hollywood Bowl, the Hollywood Roosevelt Hotel and The Outpost Estates, a premier real estate development in the Hollywood Hills.”

Toberman began construction on the fireproof Hollywood Storage building in 1925 during the Golden Age of Hollywood. It was finished the following year.

“Hollywood experienced such phenomenal growth beginning in 1911 when the motion picture industry settled in Hollywood,” Torrence said. “The need for storage was pretty significant, especially with the tremendous influx of people to Hollywood. Obviously, storage was needed. It wasn’t just for personal storage, though, but also for business storage.” 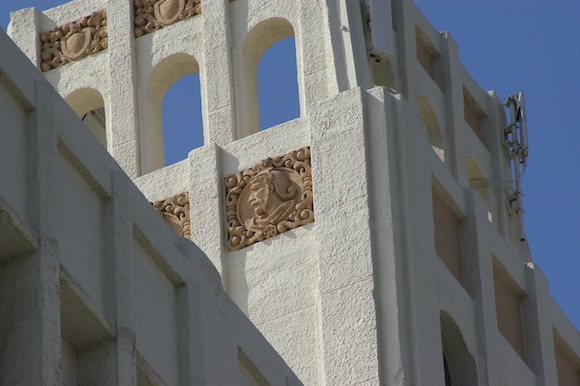 The most striking features of the building are its two castle-like towers on top, along with a penthouse that once housed radio station KMTR.

“The new building is a monumental and artistic storage warehouse, probably the only building of its kind in the United States,” according to a 1926 story in the Los Angeles Times. “Two 150-foot radio towers on the roof make it the highest building in Los Angeles, and it also has the distinction of being the largest warehouse on the Pacific Coast.”

Risky and Risqué
In his late 40s or early 50s, Toberman and another man climbed the radio towers, Torrence said.

“They climbed these towers, much to the chagrin of my grandmother, who just went nuts about it,” Torrence said. “He was never a daredevil, but for some reason they decided to climb these two towers.”

One of the building’s most risqué moments occurred in 1930 when 150 L.A. police officers broke up a “wild stag party” on the 14th floor, according to a Los Angeles Times story. The cops arrested 362 men and four women. 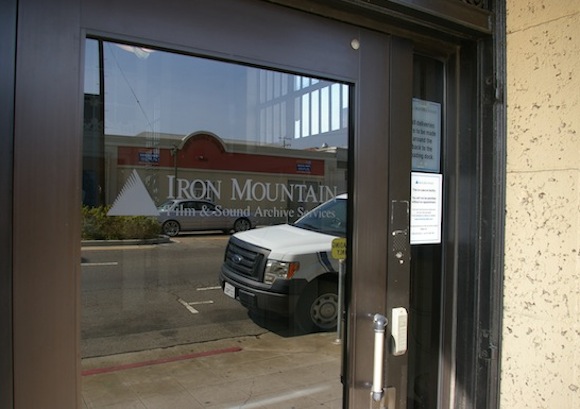 The entrance belies the history of the Hollywood Storage building.

Mountain of Memories
In 1939, Bekins bought the building. Today, Bekins is one of the country’s largest moving and storage companies.

“According to contemporaries, Milo Bekins believed that ‘moving is the American way,’” according to a 1989 story in the Los Angeles Times. “He also believed that customers entrusting their personal possessions to Bekins needed the sense of reassurance offered by solidly built warehouses located on prominent sites.”

Iron Mountain, a Boston-based storage and information management giant with more than 1,000 facilities worldwide, owns the building today. Iron Mountain declined SpareFoot’s request for an interview about the building as well as a tour of the building.

“Because this building is situated literally in the heart of Hollywood, it was the only storage company that catered to all the studios,” Anthony added. “In the ’30s, ’40s and ’50s, this was ground zero for every single movie that was ever made.”

Historic photos courtesy of Bruce Torrence; all other photos by Troy Anderson