The Delaware City Council approved West Delaware Storage LLC’s preliminary development plan request for a 101,200-square-foot facility on an 11-acre site on the south side of Pittsburgh Drive. The Delaware Planning Commission approved the project on Feb. 2. It would include 11 storage buildings ranging from 1,800 to 12,000 square feet, with 500 units – 80 of them being climate-controlled. There also would be 35 RV or boat storage units as well as 120 RV or boat exterior parking spaces. Source: The Delaware Gazette

Another new self-storage facility, Kings Crossing Storage, may be coming to Old Kings Road in Palm Coast, FL. It would be on a 36-acre spread on the west side of Old Kings Road, about 1.4 miles north of an intersection with Palm Coast Parkway. Unlike two other self-storage facilities that garnered initial approval in the past two months, this new one would not feature outdoor boat and RV storage. Kings Crossing Storage would have 69,741 square feet spread across two buildings at 125 Old Kings Road N. One of the buildings would be 10,011 square feet and one story, while the other would be 39,730 square feet and two stories. The facility would have a combined 838 units. Source: Palm Coast Observer

At Home Self Storage at 25th Street and JR Miller Boulevard in Owensboro, KY will open in April. It originally called for 63,000 square feet of storage lockers.  Source: Messenger Inquirer

The Planning and Zoning Commission in Wallingford, CT, voted 6-0 to approve a site plan for a three-story, 30,000-square-foot CubeSmart next to the former Zandri’s Stillwood Inn. S. Colony 1074 LLC will put up the building, adding 90,000 square feet of storage space. The former banquet facility is now the office for CubeSmart, with Jim Zandri using kitchen space for Zandri’s Catering Service. There also will be space for storage of up to 109 RVs. Source: Record Journal

A $16 million loan from CCM Commercial Mortgage to Futura Co. will help fund Nova Cove Self Storage, a 132,303-square-foot Extra Space facility in Orlando, FL. Completion is expected this year. The four-story building will have 98,448 NRSF, with 1,045 climate-controlled units, and 7,593 square feet of ground-floor retail at 14806 Narcoossee Road. Source: Multi-Housing News 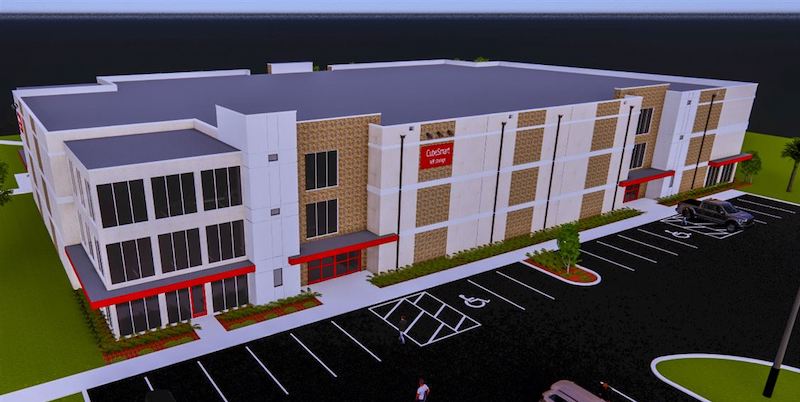 Wendell Long, owner of Mint Hill Self Storage & Parking in North Carolina, hopes to rezone 10 acres of residential property at 14211 Cabarrus Road into industrial space in order to add six climate-controlled buildings and parking. He brought it up to commissioners at a Feb. 10 developers workshop, noting that he had a waiting list of people that want to store their property at his facility. Source: Matthews – Mint Hill Weekly

Rancho Sahuarita, in Sahuarita, AZ, broke ground on Rancho Sahuarita Self Storage and RV in its community. It’s scheduled to open in late 2022. It will have 86,641 square feet, with 560 climate-controlled and drive-up units. All units will be ground-level. There also will be more than 100 RV parking spaces, covered and uncovered. 180 Self Storage LLC, based in Gilbert, AZ, is providing construction management and operations management