The Metro Entertainment Complex on Willow Branch Avenue near Post Street in Jacksonville, FL, former home of a LGBTQ nightclub, will be turned into a self-storage facility. Atlantic Self Storage, which owns about 50 self-storage spots in northern Florida, bought the Metro property in September for $1.85 million and plans a four-story building.  Source: News4JAX TV

U-Haul Moving & Storage of Rock Springs, WY, will replace an 89,792-square-foot former Kmart store. It will be U-Haul’s fifth store in the state and have 700 climate-controlled storage units. Source: Multi-Housing News

CBRE announced the sale of a 2.34-acre self-storage development site at 345 E. Ann Road in North Las Vegas to Madison Capital Group, a private equity real estate investment and development firm, for $3.25 million. The site is entitled for a multistory, 77,000-square-foot facility with 670 self-storage units. Walter Bauer with CBRE Self Storage Advisory represented the seller, a private investor. There are 315,936 people living within a five-mile radius.

InSite Property Group, based in Torrance, CA, purchased a development site in Glendale, CA, less than one mile from the Glendale Galleria, the fourth-largest mall in Los Angeles. The ground-up development calls for an 85,000-NRSF five-story building. It will be surrounded by 225,000 residents within a 3-mile radius.

A U-Haul retail, moving and self-storage facility is coming to an undeveloped site at 8200 Jefferson St. inside the Journal Center Corp.’s business park in Albuquerque, NM. The U-Haul Moving & Storage at Journal Center is scheduled to be finished by year-end. Plans call for a three-story, climate-controlled building, outdoor drive-up storage buildings, a warehouse and covered storage/parking for RVs, boats and vehicles. Source: Yahoo! Finance

Trojan Storage opened a 191,500-NRSF facility at 6200 Garland Drive in Commerce, CA that has 1,681 units, including drive-up and climate-controlled spaces. The location is about eight miles southeast of Downtown Los Angeles, in a federally designated opportunity zone. Trojan Storage is based in Redondo Beach, CA. 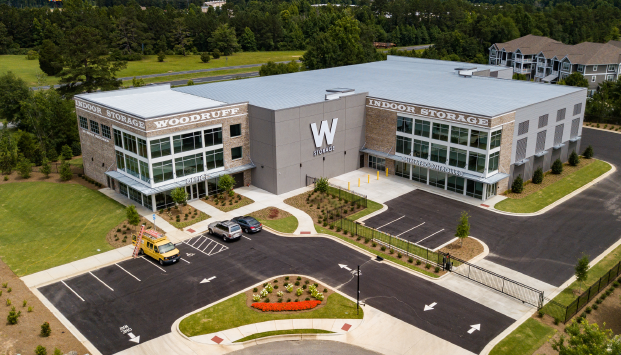 Woodruff-Lakeside Storage, managed by Absolute Storage Management and based in Midland, GA, was named Facility of the Year by the Georgia Self Storage Association. Woodruff Real Estate Services LLC opened the three-story, 100,000-plus-square-foot, 554-unit, climate-controlled 2.6-acre site on May 17, 2021.