The planet is getting hotter thanks to climate change, and that means that the climate of America’s most popular cities will be much more uncomfortable at the start of the next century.

As it turns out, some of the largest growing cities in the U.S. will be some of the hardest hit by climate change. As we push through the final days of a record-setting summer, we decided to examine how the cities where people are moving to in the largest numbers will fair in the year 2100, given are current trajectory of CO2 emissions.

The following list shows the most popular moving destinations in the country, sorted by a combined ranking of their current “heat” and their forecasted “hotness”. In other words? The “hottest” hottest cities in the United States.

To create this list we took the 15 cities with the largest population increase between 2015 and 2016, according to the United States Census.

Then we ranked those cities by two more factors: The Sperling Heat Index and the projected increase in extremely hot days between now and 2100.

The final ranking below combines rankings for population gains, the heat index and increase in extremely hot days. 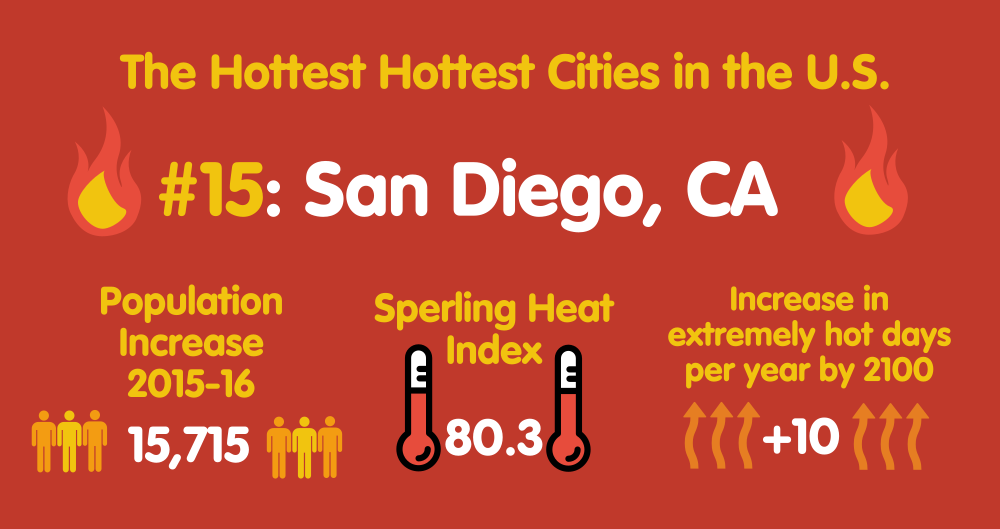 Sunny San Diego is actually the “coolest” city on the list thanks to its breezy coastal location. The southern California city may be a relative oasis in the year 2100 with only 10 more extremely hot days a year than present. 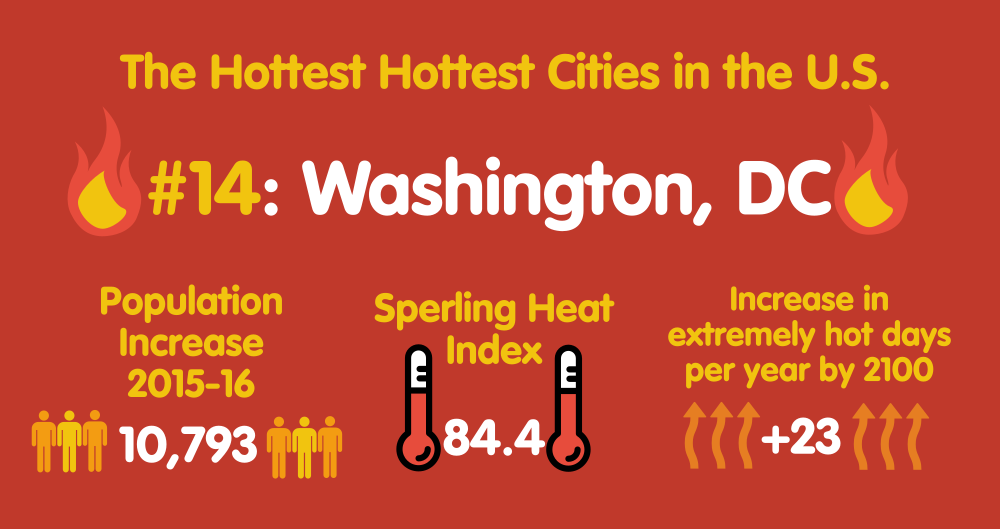 Sweltering summers are par for the course in the nation’s capital, but they are poised to intensify over the next several decades. While the number of extremely hot days (over 100 degrees) will increase substantially, the overall heat index of 84.4 makes D.C. one of the cooler spots to relocate. 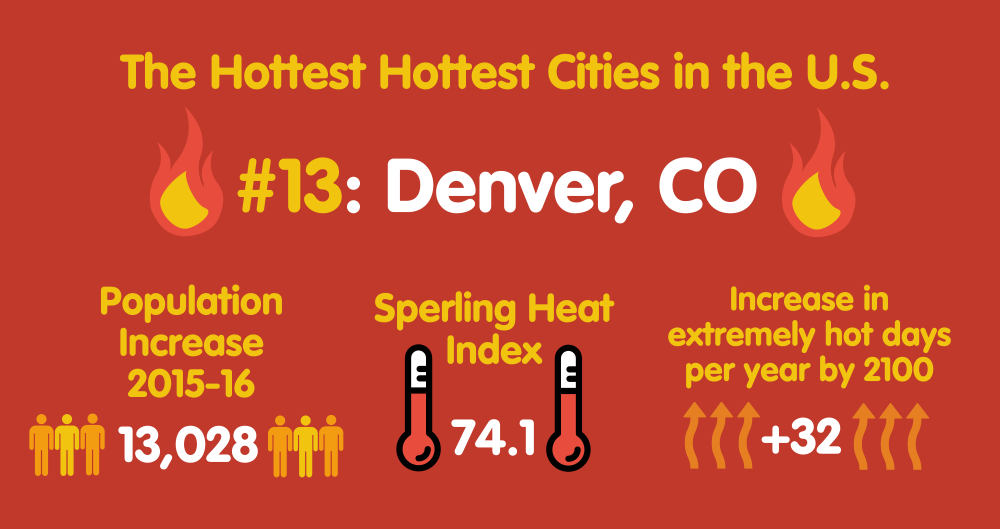 Denver may be another refuge city given the current pace of climate change. While the number of extremely hot days (over 100 degrees) is forecasted to rise drastically, Denver has the second lowest heat index on the list. 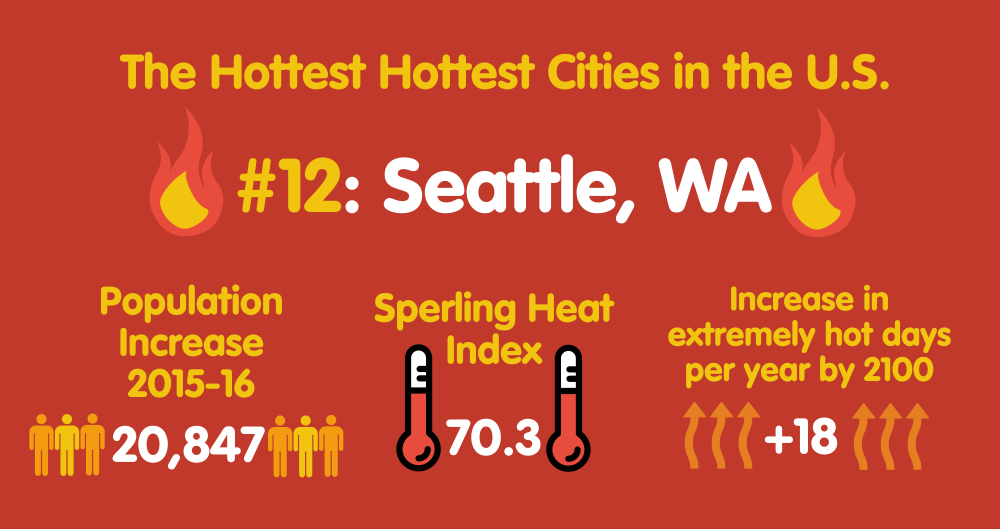 Seattle has the lowest heat index on the list, and it is only expected to gain 18 more days over 90 degrees by 2100. But it is one that is currently seeing the most gains in population, coming in 5th overall. That may only intensify if more people flock there due to its favorable future climate. 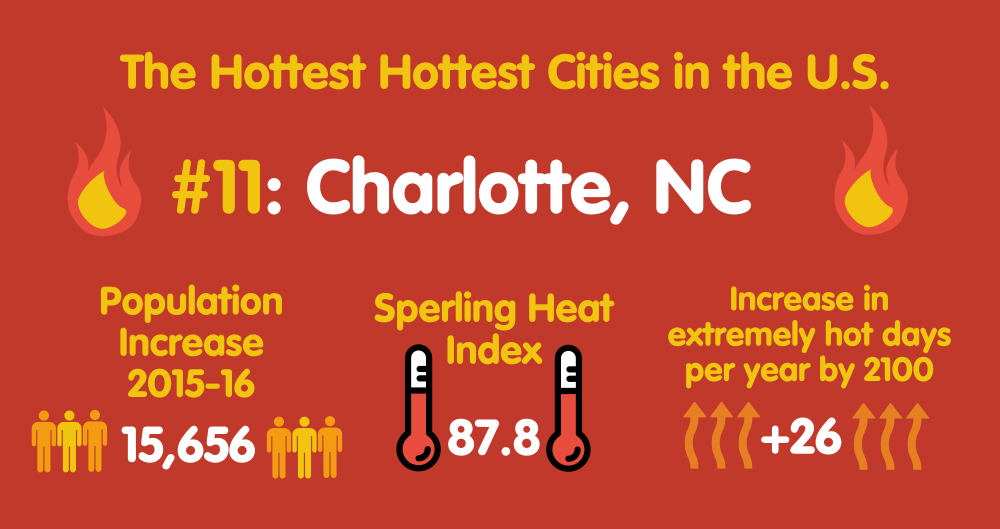 Charlotte will be plenty hot come 2100, with 26 additional days of extremely hot weather each year, but that isn’t stopping many people from moving there. 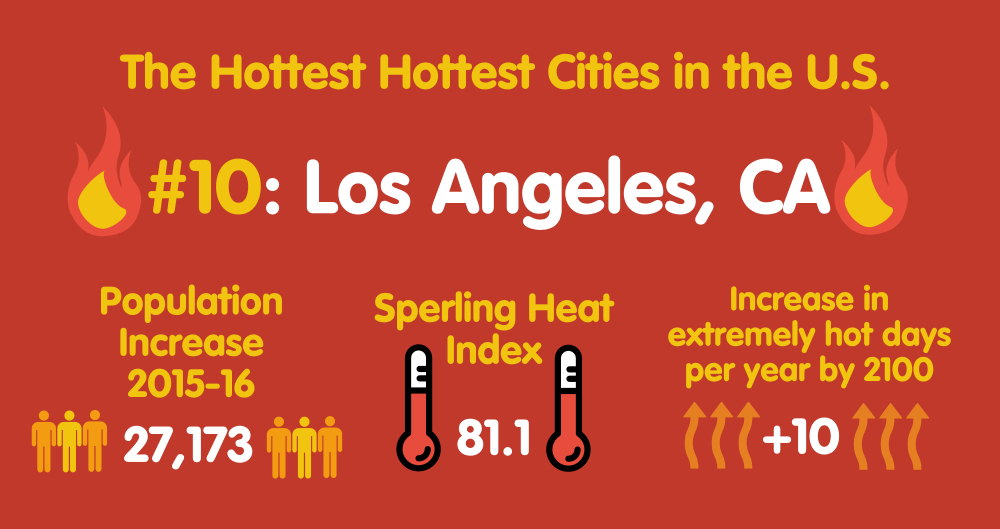 L.A. is known worldwide for its year-round perfect weather. The City of Angels is only set to see 10 more extremely hot days over 100 degrees a year on average by 2100, so that reputation might last for a while to come. Los Angeles had the second highest population increase on this list. 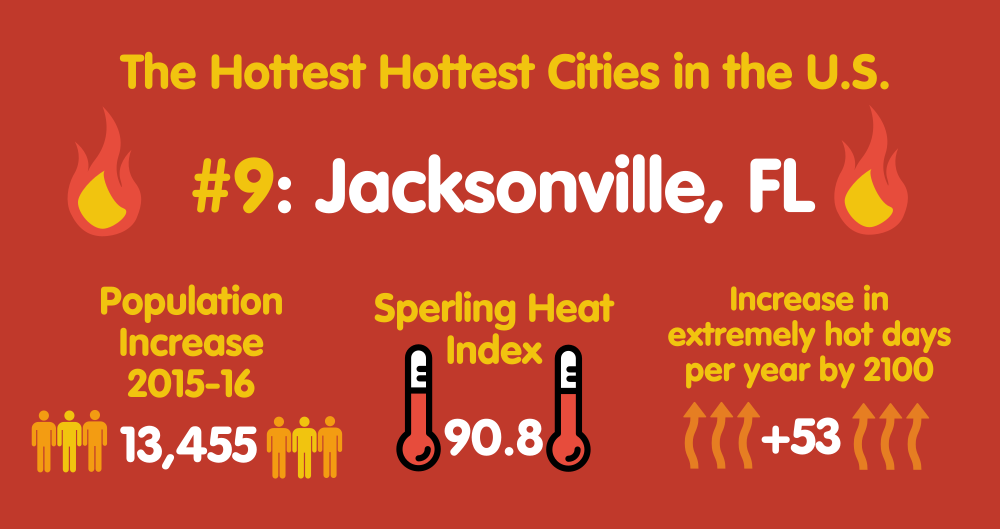 Things are starting to heat up now. This coastal Florida city faces an uncomfortable future with 53 more days of extremely hot weather anticipated by 2100. 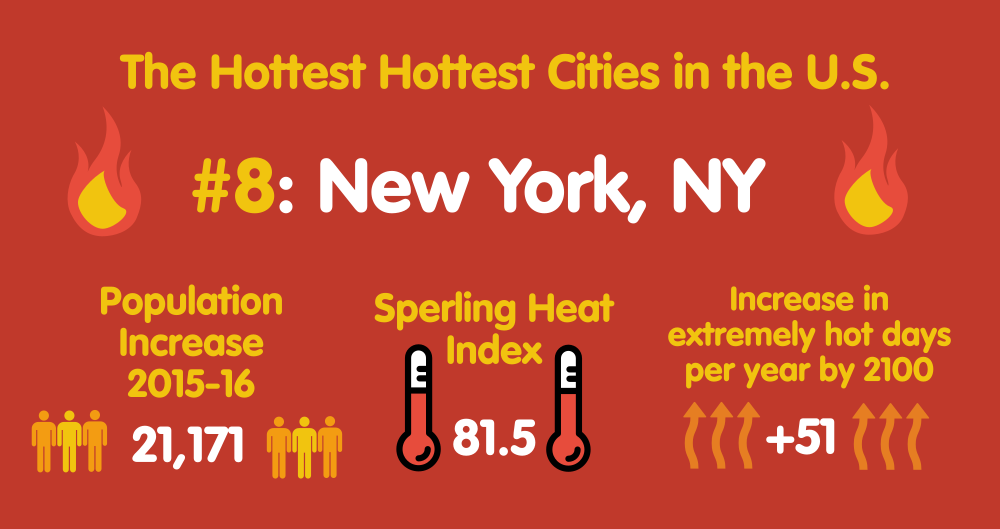 Despite its Northeastern location, NYC is expected to get a lot hotter in the future with more than 50 days over 90 degrees expected by the year 2100. Coming in fourth in terms of population growth, the urban density of New York is a contributing factor to the “heat island effect”—an area that is warmer than its rural surroundings due to elevated human activity. 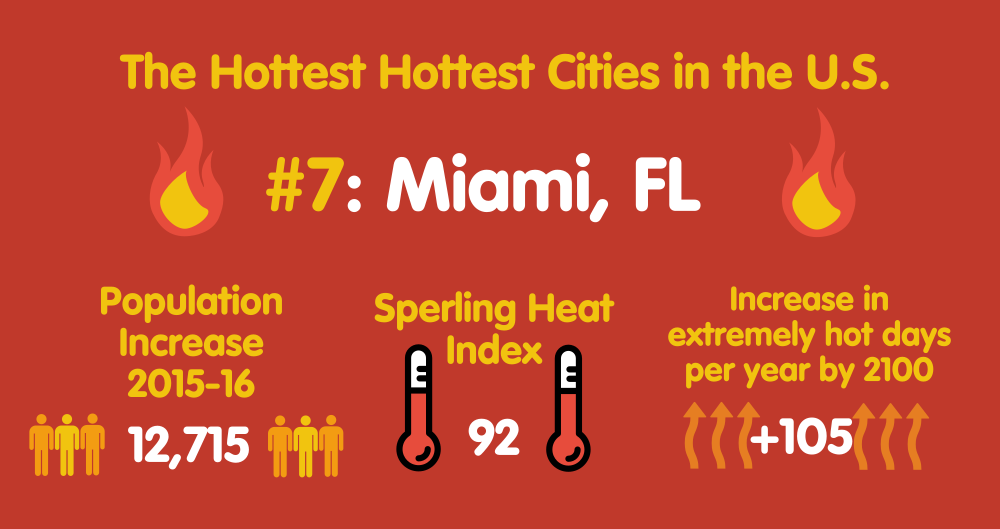 As if Magic City wasn’t hot enough already, the Florida metropolis is slated to have the biggest increase in extremely hot days on our list. The city is expected to have more than 190 days over 90 degrees in 2100, compared to 86 days currently. That is an increase of more than a hundred additional days of brutal temperatures each year, more than six months 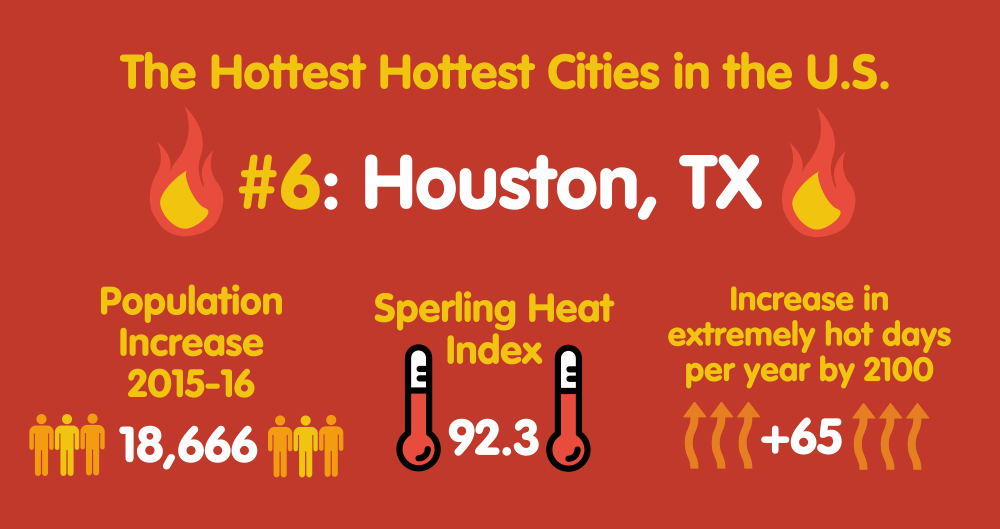 Brace yourself, Texas is coming. Spoiler alert: The next five hottest cities are all in Texas. People are moving to the Lone Star State in record numbers, and record setting temperatures are ahead for all of them. Among its Texas neighbors, Houston will see the smallest increase in extremely hot days over 100 degrees. 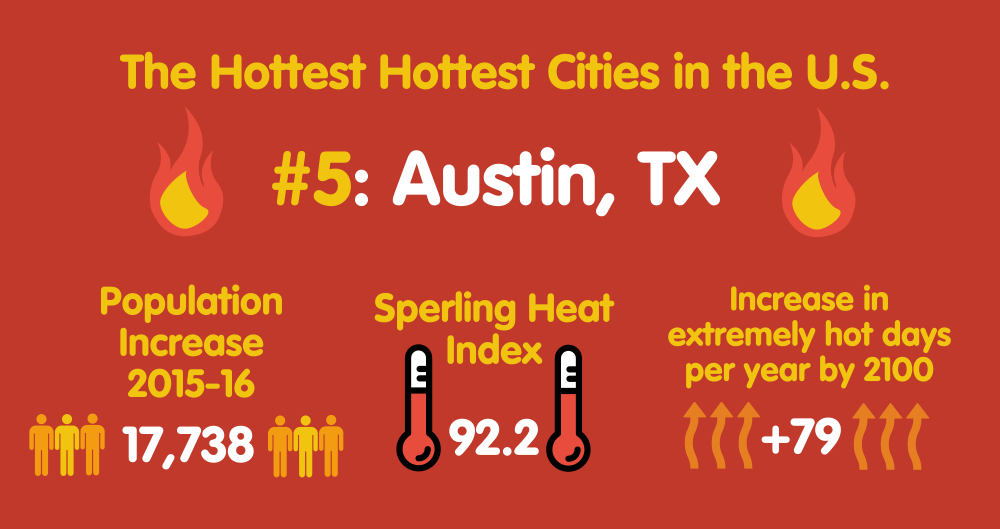 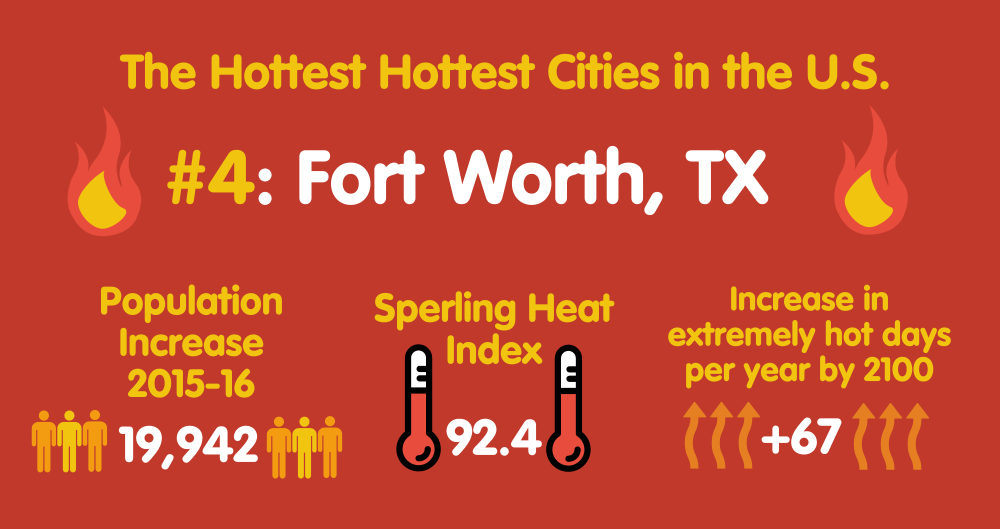 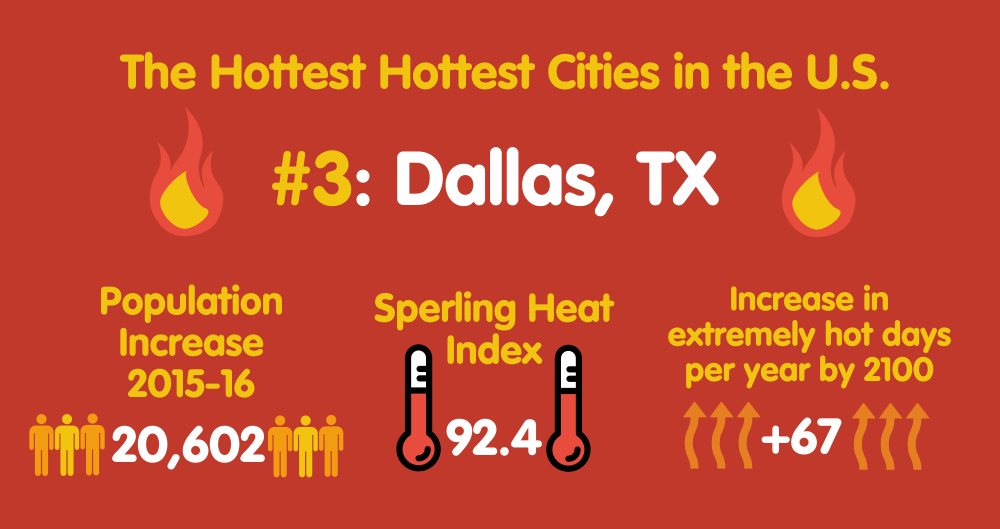 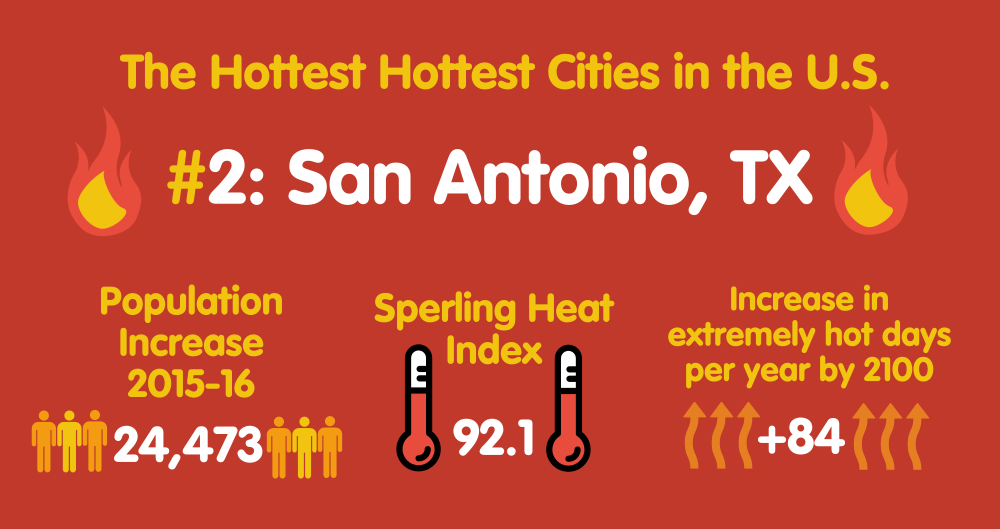 And San Antonio is projected to be the hottest of the Texas cities on our list, where it is expected to experience 96 days of above 100 degrees by the year 2100. That may be good news for the paleta vendors, but not so good for everyone else. 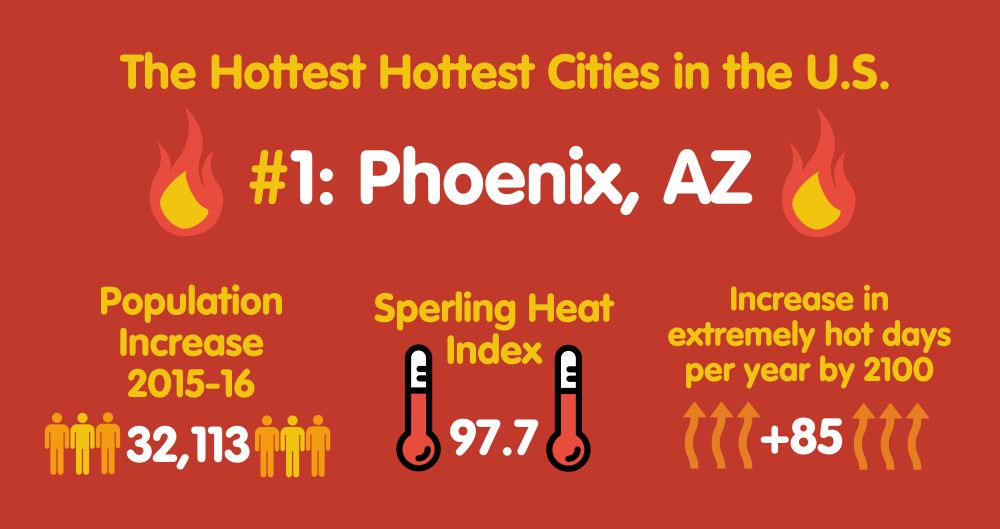 Phoenix saw the biggest numerical increase in population last year, where those folks (and their progeny) can look forward to living in one of the hottest climates in the country with a heat index of 97.7. The desert city, which experienced an airport shuttering heatwave this summer, can expect temperatures to intensify. The city is expected to experience more than a 100 days over 110 degrees each year, an increase of 85 days from current levels. So if you think its hot now…just wait.