For Becky Blanton, the journey began when her father died of brain cancer in 2006.

Shortly after her dad’s death, Blanton quit her job as a newspaper editor in Colorado, packed up her green 1975 Chevy van, and hit the road with her cat and Rottweiler riding shotgun. As an avid camper and traveler, Blanton imagined the next year would unfold like one long road trip that would let her sort through the emotions of her father’s death while also seeing the country. All things being equal, she’d emerge with clarity and enlightenment. 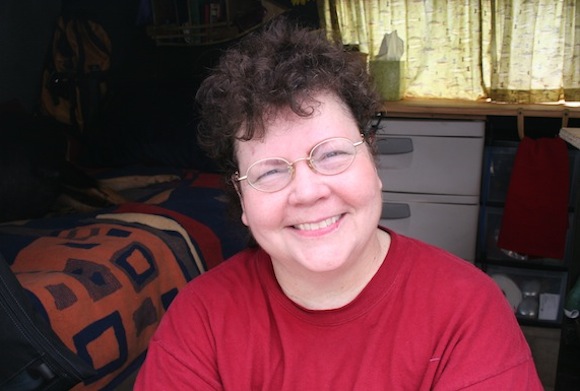 Within just a few months, however, Blanton—who’d been estranged from her father for 15 years before his death—began spiraling into a deep, unexpected depression. The freelance writing gig she was leaning on to sustain her travels dried up, and the money ran out. She eventually found herself living in a self-storage unit just outside Denver.

“It was June, and living in the van was miserably hot. I needed somewhere to get away from the heat, and the storage unit was the only thing I could afford,” said Blanton, a native of Knoxville, TN. “I looked for rooms to rent, but I would have needed to get rid of almost everything I owned. Besides, most places wouldn’t let me live with my pets, and there was no way I was giving them up.”

The unit was small—10×20, or 200 square feet. Blanton already had been renting it to store her belongings while touring the country. It wasn’t climate-controlled, but it was far cooler than the green van she’d affectionately named Booger.

Meanwhile, managers at the Colorado facility (which Blanton didn’t want to name) looked the other way.

“After a few days, they knew what I was doing,” Blanton said. “But they knew me already, and they also knew that I used to be a police officer. I wasn’t doing drugs or drinking. I wasn’t causing problems. I had just fallen on hard times, and they were in a position to help.” 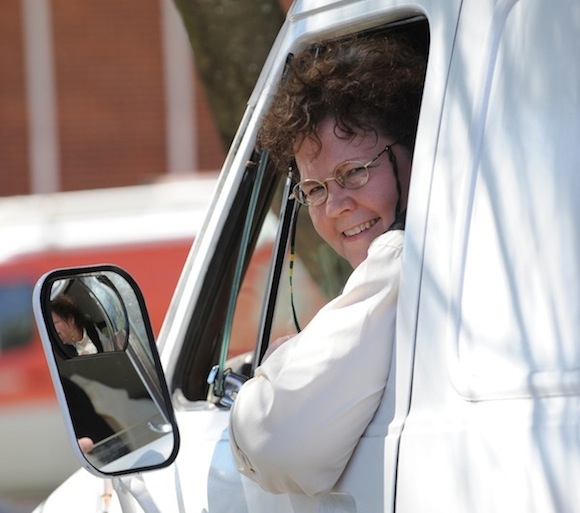 Nonetheless, Blanton’s unique living arrangement didn’t come without challenges. For instance, she needed to camouflage her self-storage quarters from other tenants.

To accomplish this, Blanton collected cardboard boxes from nearby grocery stores and stacked them a few feet from the entrance, creating the illusion that her unit was packed floor to ceiling. Behind that secret cardboard wall, however, was a remarkable setup that included a bed, an ice chest, a small couch, a battery-powered lamp and a few posters taped to the corrugated sheet-metal walls.

“I’m a female. We nest wherever we go. So I made the place livable and even a little cozy,” Blanton said. “It wasn’t much, but it was comfortable.”

I found out a lot about what it takes to live in a storage unit. The key is remaining invisible.
— Becky Blanton

Blanton quickly found part-time employment at a nearby retail store called Camping World, where she earned $11.50 an hour as a night-shift customer service representative. Camping World also had an employee gym and showers, where Blanton washed up each day before her shift.

Whenever she could afford it, Blanton ate at local buffets, always arriving at the tail end of the lunch shift, when meals often cost about $5 less than the dinner menu.

“I found a lot of really kind people in restaurants. They would give me extra helpings of food or a to-go box without charging me for it,” Blanton said. “Cooks would also give me left over meat and bones for my dog.” 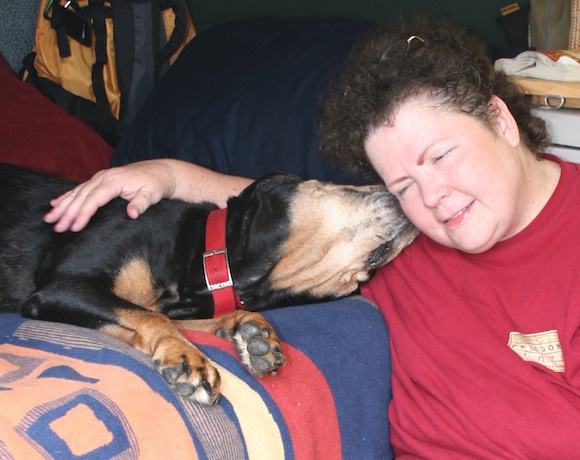 During the day, Blanton scoured Craigslist for a variety of odd jobs. For instance, she reached out to a local psychiatrist who offered to pay $200 to anyone willing to be interviewed about depression. She also responded to the University of Colorado in Boulder, which was seeking someone to provide the voice for its automated phone system. She even got a part-time gig as a mystery shopper for a national chain of self-storage facilities.

“I’d call up storage facilities all over the country and ask them questions about their business, including whether or not they had homeless people living in their units,” Blanton said. “I thought that was just hysterical.”

What was perhaps most surprising to Blanton was how easy it was to settle into this new way of living.

I know what it’s like to feel invisible to the rest of the world.
— Becky Blanton

“I really didn’t expect how easy it would be to make it happen, which I definitely couldn’t have done without the support of the facility managers,” Blanton said. “And I found out a lot about what it takes to live in a storage unit. The key is remaining invisible. And you can’t tell anyone what you’re doing. Not your friends or anyone you meet. If you do, it will eventually get back to the manager.”

And while the managers at Blanton’s facility knew what she was up to, the facility’s off-site owners had no idea. Regardless, Blanton said she never really feared getting in trouble.

“The worst thing they can do is kick you out and maybe have you arrested for trespassing,” Blanton said. “But I was a cop at 21. I know how they think and how they operate, so I figured if it ever came down to it, I could talk my way out of trouble. But I’m glad I never had to test that theory.” 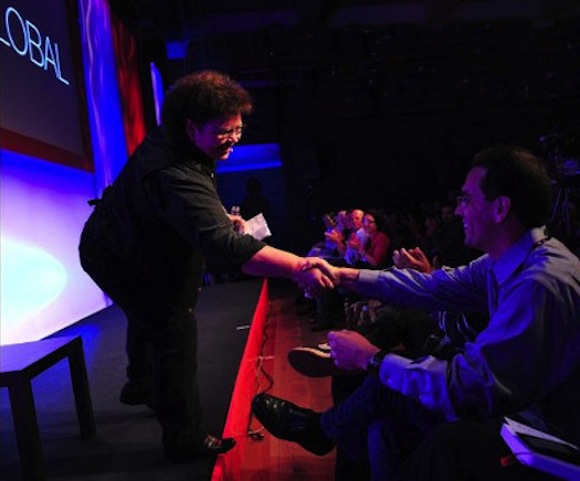 For four months, Blanton thrived inside her tiny corrugated home, but when October rolled around, the situation became increasingly dire. Colorado’s nighttime temperatures often hovered around freezing. Without heat, her unit started feeling like a giant icebox. Blanton knew she had to move on.

So she packed up her van and hit the road once again, this time heading south to her hometown in Tennessee. For the next few months, she couch-surfed with friends and continued living out of her van. And her depression grew worse.

Eventually, it was a phone call from a friend that saved her.

Just before her father died, Blanton had written an essay about the physical and sexual abuse he’d inflicted upon her, as well as how she came to terms with the trauma while he was on his death bed. The essay was called “The Monster,” and Blanton had sent it to “Meet the Press” host Tim Russert, who was looking for essays to include in his upcoming book “Wisdom of Our Fathers: Lessons and Letters from Daughters and Sons.” Russert liked Blanton’s essay so much that he decided to feature it in the final chapter of his book. But Blanton didn’t know this until she got that fateful call.

“So there I was, paralyzed by my depression, suicidal and curled up in a fetal position in the back of my van, when a friend called and said Tim Russert was on C-SPAN talking about me and my essay,” Blanton said. “That’s when I reconnected to who I was.” 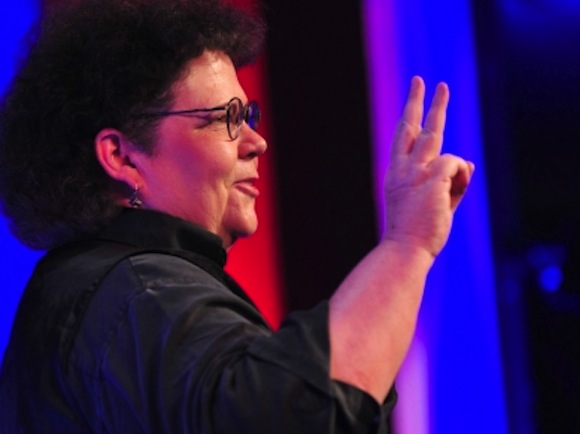 Since then, Blanton’s life has undergone a remarkable transformation.

After emerging from her depression, she got a job working at a newspaper in Tennessee. In 2009, she gave a TED talk about her experience with homelessness. That talk caught the attention of Kissito.org, a nonprofit that seeks solutions to problems like poverty and natural resources preservation. Kissito’s vice president of business development liked Blanton’s TED talk so much that he asked her to write a book about his organization and the global charity work it does.

Blanton, 58, now lives in an apartment in Virginia and uses a nearby self-storage unit as her office—this time with the owner’s knowledge and permission. She’s currently writing her second book for Kissito; it’s about a devastating hailstorm in Africa that wiped out crops and left more than 2,000 villagers without food or water. What’s more, she’s in the midst of two celebrity-ghostwriting projects and continues to advocate for what she calls America’s “invisible homeless.”

“Most people think of the homeless as alcoholics and drug addicts, but that’s just 15 percent of the homeless population. The other 85 percent have jobs, they try to seek out normalcy, they have kids and are desperate for some sense of self-esteem,” Blanton said.

“I was one of those people, and I know what it’s like to feel invisible to the rest of the world. And that’s the horrible thing about homelessness. You’re just out there. So you want something to give you a sense of a place, somewhere you can call home. That’s what I had at that storage unit, and it really did make a difference.”