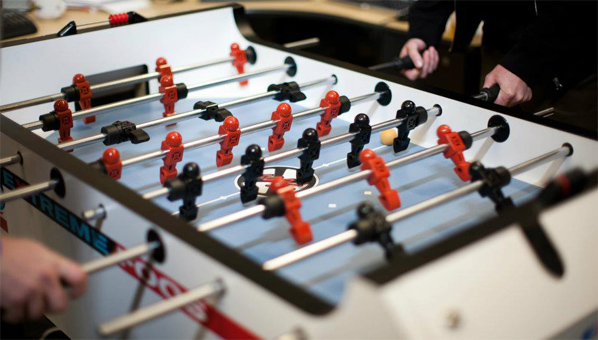 When it comes to leisurely pastimes, Foosball is the most cutthroat you can get. Since we at SpareFoot strive for only the most extreme life experiences, it is natural that our office features a Foosball table and a highly competitive roster of Foos combatants.* With fierce competition comes the need for self-discipline, so we’ve come up with a few guidelines that have (so far) protected our office culture from the violence and chaos lurking behind every game of Foosball.

1. Don’t take “no” for an answer. If you have a challenger in your sights, it is within your rights to do whatever you can to make them stop working and come play a game with you. They know they want to, and so do you. Taunting, jokes about their mom, and questioning their manliness/womanliness are all very effective ways to initiate an invigorating match.

2. Carb up. In sports requiring moderate-to-no exercise, daily food intake is key to victory (and, coincidentally, survival). Tony Emerson, SEO Analyst and Bank Shot Expert at SpareFoot, has some very specific nutritional advice: “When training up for a big Foos match, I aim for a 40/30/30 protein/carbs/fat ratio. On match day, I switch that up to 30/40/30 to ensure there’s enough glycogen in my cells for a grueling game. In terms of supplementation, creatine, whey protein and fish oil are the obvious must-haves.” Or, make a sandwich or something.

3. Find your shot and stick with it. If you master a shot in the face of all opponents, you will be able to vault over much of your competition. Cheers of “There he goes again!” and “He just pulled another [your name here]!” will echo the halls of Foosball Fame, and your name will be placed among the pantheon of Foosball Greats like Lee Peppard, founder of the first Foosball Tour and paragon of having too much time on one’s hands. A few classic foosball shots to make your own:

4. Physics is just a theory. It’s also a fickle mistress in the land of Foosball. If it’s not your day, gravity will create a funnel through which even a baby could hit your goal. There is nothing you can do when this happens except follow the next tip:

5. Take everything personally. Foosball is 90% attitude, and the only way to win is to couple a steely resolve with the emotional turbulence of, say, the honey badger. One mustn’t “congratulate” his or her “opponent” on a “great score.” Rather, the offender should be seen as a cheater and a butthead. He must have had an inside tip as to the lean of the foosball table, and he’s probably all Juggernauted-out on steroids. Insult his mom in the spirit of the game. But no matter how high emotions flare, everything can be resolved with a post-game beer.

If your office loves the sport but doesn’t have the room to indulge, consult your local self-storage manager for help! A storage unit provides the perfect solitary setting for explicit Foos-related insults.

Do you have a group of Foosers who compare to the SpareFoot team? Tell us about your own office Foosball experiences below!

*It should be noted that SpareFoot employees work upwards of 10 hours a day, cranking away at our never-ending to-do lists. Startups are intense, so we need a break sometimes. Enter Foos. 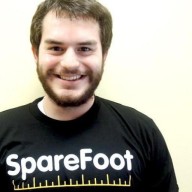 Matt is a writer for SpareFoot. When he isn't shaking up the industry with his hard-hitting blog posts, he enjoys cooking (mac n' cheese and pie only, please), discovering new music, and relating life events to television shows. Contact: matthew@sparefoot.com
Twitter