AUSTIN, TX (April 20, 2017) – Warmer temperatures signal the arrival of America’s busiest season: moving season. According to a new survey released by SpareFoot.com, the largest marketplace for storage, Americans have moved an average of six times throughout their lives. The U.S. Census Bureau projects 40 million Americans will add another home to their list this year, with 65 percent moving between Memorial Day and Labor Day.

SpareFoot set out to explore the effects of moving and decluttering, from its impact on personal relationships to psychological repercussions. The findings reveal that Americans of all ages struggle to part with sentimental items and view the entire moving process as stressful. 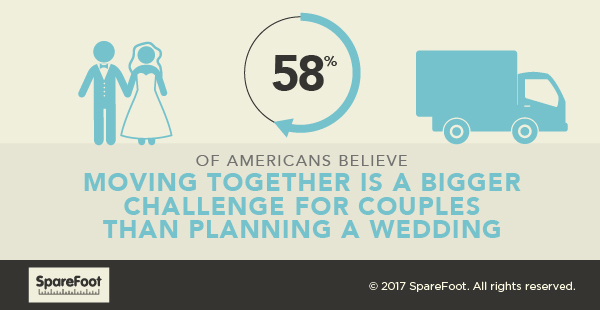 Moving is especially stressful for parents – from start to finish. Prior to a move, 69 percent of American parents claim they prioritize their child’s needs over their significant other’s needs. Additionally, the actual process of moving with children is longer according to participants – up to eight days longer, on average. Wading through the sentimental value of their child’s belongings may also contribute to a longer move, with 81 percent of parents admitting they have kept a child’s possession, even when given permission to get rid of it. 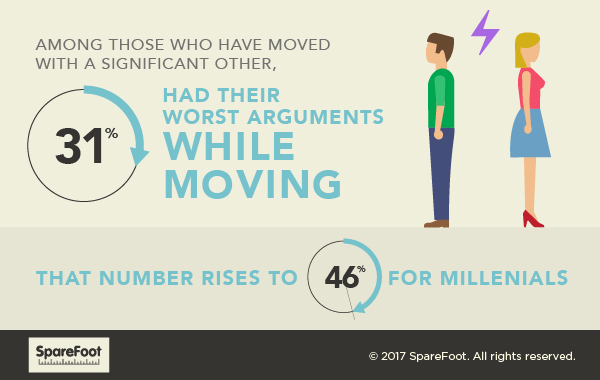 Americans are faced with tough decisions as they try to sort through years – and sometimes decades – of accumulated stuff. 76 percent of Americans feel their home should include everything they may need and want, making the task of decluttering lengthy. And while material goods are desired, sentimental value takes priority, with Boomers and Millennials reporting that photos and photo albums would be the hardest part with.

SpareFoot.com is the largest marketplace for storage, making it easier to move and store your stuff. Our website lets you find and compare the best storage deals near you, and instantly rent online or by phone for free. With the most up-to-date information on storage available, SpareFoot makes finding your stuff a home the easiest thing to cross off your to-do list.

The SpareFoot Moving Season Survey was conducted by Wakefield Research (www.wakefieldresearch.com) among 1,000 adult Americans, ages 18+, between March 8th and March 15th, 2017, using an email invitation and an online survey. Quotas have been set to ensure reliable and accurate representation of the U.S. adult population 18 and older.