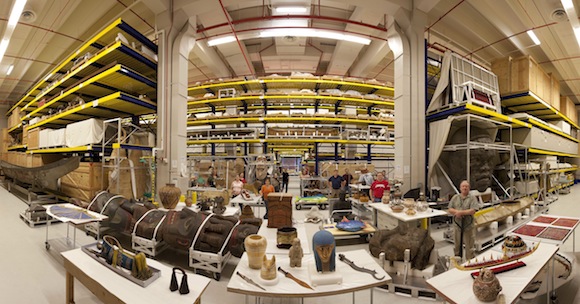 During a recent and long-planned getaway to Washington, DC, the signs appeared everywhere. Notices at the entrances to scores of federal buildings reminded me—not that I really needed reminding—that these places were closed because of the federal government shutdown.

Among the spots sporting “closed” signs were the 11 Smithsonian Institution museums along the National Mall. This meant I couldn’t tour the world’s largest collection of aircraft and spacecraft (National Air and Space Museum), couldn’t gaze at the Hope Diamond (National Museum of Natural History) and couldn’t admire the Star-Spangled Banner (National Museum of American History).

To be sure, it was disappointing to visit our nation’s capital without being able to step foot inside some of our nation’s cultural gems. Fortunately, I had explored most of the Smithsonian museums during previous trips to DC. But you never know what you might see on a return trip to a Smithsonian museum, as exhibits are rotated regularly.

Now that I work in the self-storage business, I got curious about where Smithsonian museum items are kept when they’re not on display. A little digging on the Internet turned up the answer: the Smithsonian Institution’s Museum Support Center. You might say it’s the world’s ultimate storage facility. The center even plays a key role in Dan Brown’s book “The Lost Symbol.” 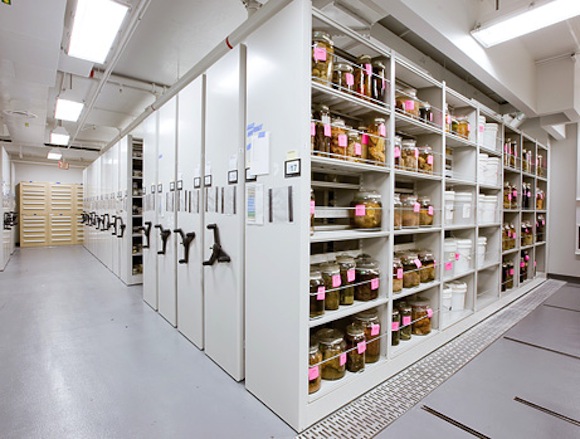 An NPR story described the Museum Support Center, which opened in 1983, as “an anonymous beige warehouse complex” that “doesn’t look like anything special until you get inside.”

Located in the DC suburb of Suitland, MD, the Museum Support Center spans about 4½ acres; storage space takes up about 500,000 square feet (more than four times the size of an average Walmart store). Each of the facility’s five storage “pods,” as the Smithsonian calls them, is about the size of a football field and rises to about 28 feet.

Much like a lot of mainstream self-storage facilities, the Smithsonian’s primary off-site storage facility boasts sophisticated systems for climate control, pest control and security. Here are a few of the details:

While you and I aren’t likely to gain access to the Museum Support Center, we do have a sense of what’s stored inside. 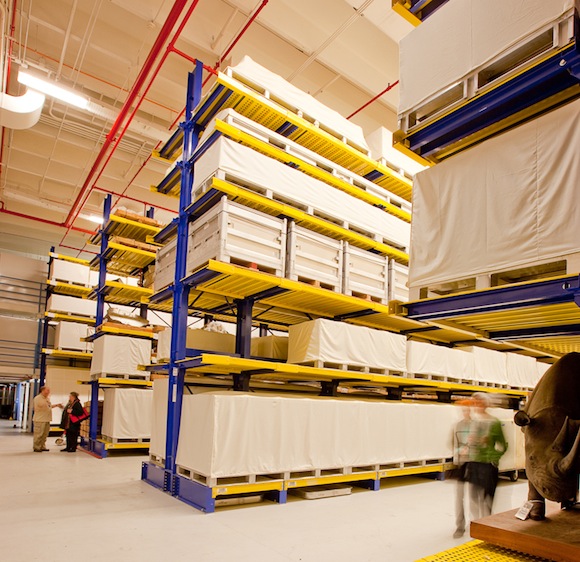 Among the roughly 55 million items you’d see there are dinosaur fossils, totem poles, whale skulls and Antarctic meteorites. The meteorites are put in cases “flooded with nitrogen gas so that specimens from space are kept free from earthly contaminants,” the Smithsonian says.

The center’s 125,000-square-foot Pod 5 houses the National Museum of Natural History’s 25 million biological specimens—known informally as the “wet collections.” The specimens are preserved in fluids like alcohol and formalin (a watered-down version of formaldehyde), according to the Smithsonian.

(To take a video tour of the support center’s mammal collection, visit www.smithsonianchannel.com/sc/web/video/titles/12875/theres-storage-and-then-theres-smithsonian-storage).

All in all, it sounds like a fascinating place. But, alas, the cavernous Museum Support Center is closed to the public, its vast collection of museum artifacts and objects not available for you and me to view. Well, we can at least hope the Smithsonian museums will reopen to visitors sometime soon. Are you listening, Congress?

(Note: Since this blog post was published, Congress has ended the federal government shutdown, and the Smithsonian museums have reopened.)

Photos courtesy of the Smithsonian Institution