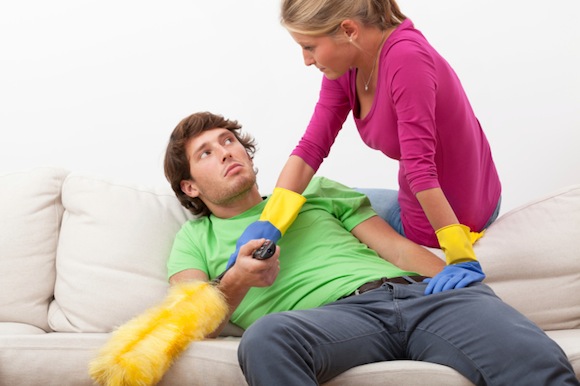 Tired of fighting with your significant other about dirty bathtubs and messy kitchens?

Even with millions of women working full-time, only one-fifth of men do housework such as cleaning and laundry, compared with 48 percent of women, according to the 2012 American Time Use Survey from the U.S. Bureau of Labor Statistics. It’s easy to see how that imbalance could lead to an argument or two.

After 20 years of marriage, Kathie Fulghum, public relations director for a marketing firm in Chattanooga, TN, and her husband, Scott, have set up a system for splitting the household chores. The couple didn’t get there overnight, though. “It was definitely trial and error,” Kathie said. “I was working full-time and told Scott, ‘I can’t do all of this and be a happy person.’”

Couples don’t have to let resentment about unequal home duties pile up like dirty laundry. Here are eight tips for divvying up those pesky chores.

1. Play to Your Strengths.
“Nobody is good at everything,” said Rahti Gorfien, a life coach in New York City who specializes in relationship and lifestyle issues.

For example, Rahti dislikes driving, so her husband, Richard, chauffeurs their son to and from school. Richard wasn’t that great at making the bed, so Rahti handles that task herself.

“He sweeps, mops, vacuums and does dishes most of the time,” Kathie said. “When people find out he wields that mop and broom and cleans the toilet, they’re surprised.” 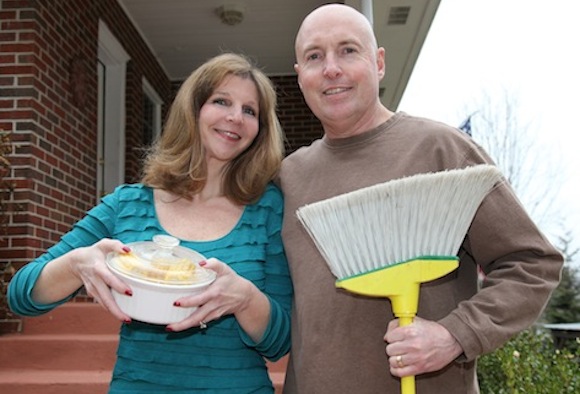 Kathie Fulghum takes on the cooking, while Scott Fulghum tackles the cleaning.

2. Don’t Micromanage.
If your husband spills water all over the floor when he washes dishes, making it an issue could be a problem, Gorfien said. If one person is less skilled at a chore or not inclined to do it in the first place, “you kind of have to take what you can get,” she said.

Also, try not to get defensive when your significant other nudges you to do a chore differently. Remember, you’re both stretching to meet in the middle.

3. Appreciate the Other Person’s Help.
You can never say “thank you” too much, Gorfien said. Keep in mind that just because your partner hasn’t completed a task yet doesn’t mean he or she doesn’t plan to finish it. “It’s important to give the other person the benefit of the doubt,” she said.

4. Find an Organizing Method.
Some couples use a list, chart or calendar. For less clutter, try an online tool like HomeZada, an app that lets you schedule household tasks on a calendar that pops up when you sign in. The app manages maintenance projects, finances and a host of other things in addition to chores.

Beth Dodson, co-founder of HomeZada, created the app with her husband, John Bodrozic, because they often ended up in a “he said, she said” battle about who did which chores or home projects. John would swear he sealed the kitchen granite the year before, but Beth couldn’t recall it. Now they keep track of everything in HomeZada, so there’s no reliance on memory. “We have proof,” Dodson said. 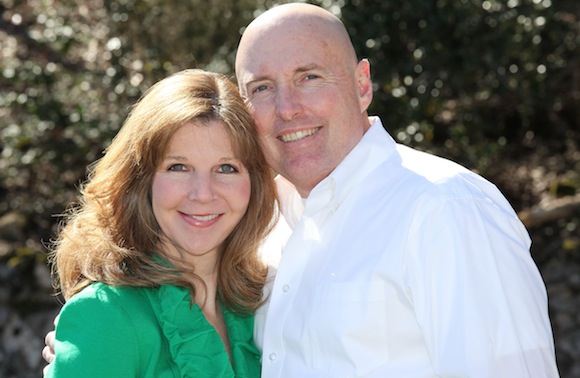 Kathie and Scott Fulghum have been married for 20 years.

5. Avoid Assumptions.
If you say you’d like the kitchen table to remain clean, tell your partner exactly what “clean” means to you. Does a half-empty coffee mug qualify as clutter? Even a crumpled napkin and a dirty spoon on the table can send a message that you’re ignoring your part of the deal.

“Nobody is a mind reader,” Gorfien said. “What’s clean to one person is squalor to another.”

6. Share Mutually Distasteful Tasks Equally.
Gorfien and her husband equally despise washing silverware, so both do it, with an unspoken agreement to take turns. Kathie and Scott each do their own laundry and alternate picking up dry cleaning. They also each pay specific bills with separate checking and credit card accounts.

7. Delegate Chores to the Kids.
Even small children can carry dishes to the sink after mealtime and scrape food into the garbage, Gorfien said, or teenagers can walk the dog.

“Our kids learned to do their own laundry early on,” Kathie said. Her teenage daughter does the dishes occasionally and cleans her own bedroom and bathroom.

8. Consider Hiring Help.
Kathie and Scott employed a house cleaner for five years. Scott eventually took over housecleaning because he wanted to save money. If he stops cleaning house, they’ll hire a housekeeper again as long as Kathie is working full-time.

If you track the division of labor in HomeZada, you can see which chores and home maintenance tasks aren’t getting done on time. Then you’ll know whether to consider outsourcing a job or two.

“It sparks the discussion,” Dodson said. “It’s designed to help people have conversations.”