The online storage auction business remains in its infancy with a market wide open and growth on the upswing.

“It’s like a gold rush,” said Adrian D’Atri-Guiran, chief technology officer of online auctioneer Bid13 Storage Auctions, “Everyone is trying to get facilities signed up onto their site.”

Several online auction platforms say they are nearing the break-even point or expect to turn profitable this year.

Interest in storage auctions exploded with the December 2010 premiere of “Storage Wars” on the A&E Network. The show, which completed its eighth season last year, introduced consumers to the idea that they could resell someone’s castoffs for profit.

The first online storage auction platform hit the scene more than five years ago—that company no longer exists. Several companies have come and gone since then. About eight currently operate in the space, with at least one of sizable heft.

Katie Cowen, district manager over Central Texas for Move It Self Storage, began using online storage auctions via StorageTreasures last year. A facility in Austin that was drawing very few bidders to its onsite auctions convinced her to give it a try.

“We’d have an auction and two people would show up and units would go for $10,” Cowen said. “We figured anything was better than that.”

Collections have improved significantly with the online auctions, Cowen said. The company collected about 10 percent of the amount owed during auctions held onsite. Now the operator collects about 60 percent to 70 percent with online auctions.

The company decided in February to use only online auctions for its nine Central Texas locations. About 40 percent of the company’s national portfolio uses an online auction process.

“We don’t have the delinquencies that we’ve had in the past so there are just so few units going to auction that it makes sense if there are five or less units to put them online,” Cowen said.

The biggest player in the online space is Storage Treasures. In January, OpenTech Alliance, a technology provider in the self-storage space, acquired a majority stake in Storage Treasures with plans to expand the brand into new markets. 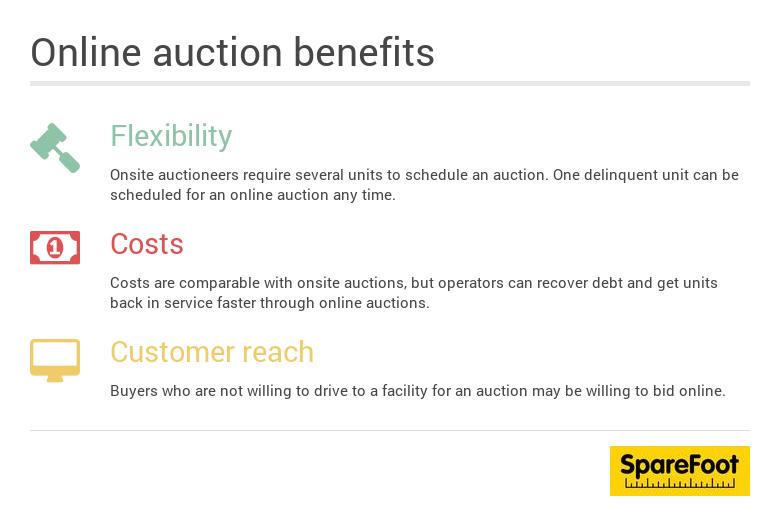 Robert Chiti, OpenTech president and CEO, said the nation’s large public storage operators have embraced the online auction concept, which lends additional legitimacy to the business. Both CubeSmart and Extra Space moved to online auctions within the past year.

“That gives everyone a sense of security that their legal departments have vetted out this process,” Chiti said. He said he expects more big — and small — players to follow suit.

StorageStuff.bid is a relatively new online platform. It held its first online auction in April 2015. The company is owned by five partners that include the owners of Sentry Self Storage and Legacy Auction Services.

Legacy is a live-auction company that’s been around since 2009. The company is phasing out as StorageStuff converts Legacy’s live auction clients to online auctions. That process should be completed by the end of the year, said Cheli Rosa, director of marketing at StorageStuff.

StorageStuff has held about 4,000 auctions to date. It considers the market to still be “wide open” with many prospective clients to pursue, Rosa said.

Besides competing against other online providers, companies in the space also have to convince storage operators to give online auctions a try, she said. Rosa estimates that about half the industry conducts their own auctions. Getting them to try something different — and to pay for it is a challenge, she said.

Charges vary slightly among firms providing online auctions. Typically, every online auction service charges a bidder’s fee of 10% to 15% of the winning bid, and some also charge a seller’s fee.

Storage Auction Kings conducts as many as 4,000 storage auctions a year, but has done just a handful of online auctions, Schur said. He doesn’t recommend them.

“The buyers hate them,” Schur said.

No smelling, no telling

“The first thing they’ll tell you is they can’t smell it. It sounds funny but it makes tremendous sense. If they are standing in front of the door when we open it, they can smell the cigarette smoke. They can smell mold. They can smell cat or animal smells. Those things are important because that helps them determine value.”

It’s also hard to capture what is in the unit via a photo, Schur said. Lighting could be bad and a buyer onsite can view the unit from different angles. But he concedes that there are advantages as well. Buyers don’t like to drive to out-of-the-way auction locations, for example, or to locations where there are very few units to be auctioned off.

Online auctions did not gain much traction when they first appeared, Rosa of StorageStuff said.

“At first we weren’t terribly concerned, but then self-storage, itself, started evolving from a technological perspective,” Rosa said. “People started using tablets in operations and paperless leases and suddenly, online auctions started to make more sense.”

D’Atri-Guiran, at Bid13, said the industry doesn’t have statistics on how many storage auctions are being conducted online but he estimates it is somewhere between 10% to 15% and growing.

“We certainly didn’t set out to ruin the business for onsite auctioneers,” D’Atri-Guiran said. “It’s just the evolution of the Internet.”

Kerry began her journalism career working as a writer/reporter at daily newspapers in Texas covering breaking news, city and county government, courts, cops and general assignments. She later specialized in business reporting and writing, spending 12 years at the Dallas Business Journal, most of that time as managing editor. More recently she has worked as a freelance writer for such publications as the Dallas Morning News, Dow Jones and HousingWire.